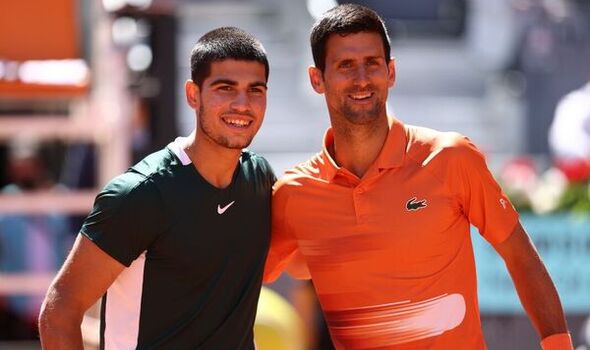 Carlos Alcaraz ‘needs’ Novak Djokovic at the Australian Open according to the Spaniard’s coach Juan Carlos Ferrero with the Serb’s presence crucial to his student’s development. The duo will be among the favourites when the first Grand Slam in 2023 gets underway and are set to compete for the biggest titles over the course of the season.

Djokovic is the most successful player in Australian Open history having won in Melbourne on nine occasions but was unable to compete this year after he was deported as a result of his vaccination status. There had been questions over his involvement again in 2023 with anyone deported from the country banned from entering for three years however it has been lifted on appeal meaning he is free to compete again.

On paper, this would seem like bad news for Alcaraz. The 35-year-old won 18 of his last 19 matches in 2022 and will be heavily backed to continue this form Down Under next year, reducing the world No 1’s chances.

However, his coach Ferrero has argued Djokovic’s participation is in fact a good thing as it will help make his charge a better player. And Ferrero claims Alcaraz would be pleased to count the Serb among his rivals in Australia.

“We need him,” Ferrero told Eurosport when asked about the Wimbledon champion. “I think for Carlos to improve his tennis he needs to play against one of the best in history. Of course, Rafa [Nadal] is there to play against him and Novak, we need him.

“In Madrid, Carlos played against Novak and he increased his level to try to win the match, so that’s what we need, to play in the Slams against him, I think it’s very important for Carlos to improve.”

Djokovic’s vaccination status also meant he was unable to enter Canada or the USA to compete in the North American tennis tour. He, therefore, missed the US Open with Alcaraz taking advantage of his absence to win his first major title.

The Serbian more than made up for it in the following tournaments winning the Tel Aviv Open, Astana Open and season-ending ATP Tour finals to finish 2022 on a high, something which came as no surprise to Ferrero.

“I think after the US Open, which he couldn’t play, he was very focused to show himself that he is able to win almost everything that he played, we saw again that he’s able to do it,” he said. “He presented himself to all the players that he’s going to be there and that he has the possibility to play in Australia, I think he’s very happy about it and I think the rest of the players as well.

“Carlos and I were talking about that we’re happy to see Novak there because if you want to win the Australian Open you have to win against the best, and of course it’s good news. But of course, it didn’t surprise me at all that he won in Turin.”

The Australian Open gets underway on Monday 16th January with the final played 13 days later.