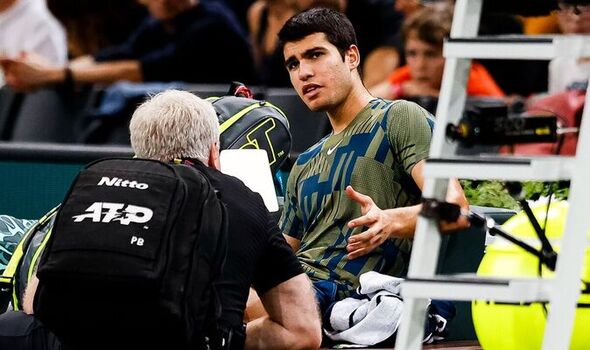 Carlos Alcaraz has ended his 2022 season early after retiring injured at the Paris Masters. The world No 1 forfeited his quarter-final match to Holger Rune on Friday and has since undergone medical evaluation, announcing that he had torn his oblique muscle. It means the US Open champion will be unable to compete at the ATP Finals or the Davis Cup Finals, bringing his breakout year to a close.

Alcaraz announced that he would be ending his 2022 season early on Saturday after retiring injured to Rune in his Paris Masters quarter-final while losing 6-3 6-6. The 19-year-old took a medical time-out for an abdominal injury at 6-5 and continued to play but was forced to end the match minutes later with the world No 18 leading 3-1 in the tiebreak.

The world No 1 has now undergone medical evaluation and announced that he tore his muscle, bringing his remarkabke breakout season to an end. “After being evaluated by my medical team, @drlopezmartinez and @JuanjoMoreno_M , unfortunately this is the result of my injury: muscle tear in the internal oblique musculature of the left lateral abdominal wall with an estimated recovery time of six weeks,” he wrote on social media.

“Unfortunately I won’t be able to be in the ATP Finals or the Davis Cup Finals. It is a hard and painful moment to miss these two important events for me, but it only remains to be positive and think about recovering well. Thanks for the support!”

The Spaniard was set to make his debut in Turin a year after winning the Next Gen Finals – the 21-and-under version of the prestigious season-ending championships. But Taylor Fritz will now take his spot and made a debut at the top-eight tournament himself following Alcaraz’s withdrawal.

Alcaraz has enjoyed a breakout season not seen in years as he won two Masters 1000s and two ATP 500 titles before lifting his maiden Grand Slam title at the US Open. It made him the first teenage Major champion since Rafael Nadal back in 2005, and he rose to the top of the rankings to become the youngest world No 1 in ATP history after starting the year ranked down at No 32.

Where will Emma Raducanu be ranked and what comes next after early US Open exit?