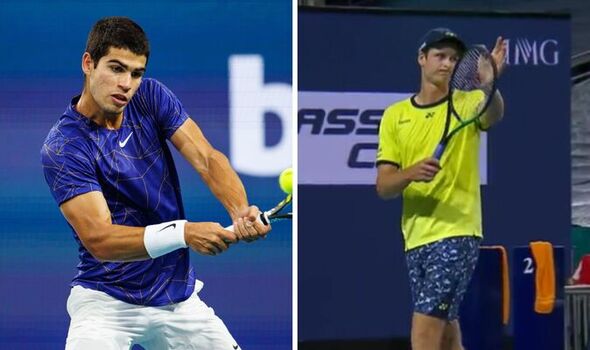 Carlos Alcaraz became the second-youngest male finalist in the history of the Miami Open behind Rafael Nadal when he defeated Hubert Hurkacz in Friday’s semi-final. During his 7-6(5) 7-6(2) victory over the defending champion, the 18-year-old was praised for conceding a point Hurkacz believed he shouldn’t have lost.

Alcaraz is through to his maiden Masters 1000 final at the Miami Open. At 18 years and 11 months, he is the second-youngest to make the championship match after a then-18 year and 10-month old Nadal back in 2005.

The world No 16 defeated the defending champion, Hubert Hurkacz, in straight sets to reach the final where he will face fellow first-time Masters finalist Casper Ruud on Sunday. It was a hard-fought battle between the 8th and 14th seeds in Friday’s semi-final but in the midst of the action, the young Spaniard showed a great display of sportsmanship when he forfeited a point during the first-set tiebreak.

Chair umpire Fergus Murphy called one of Hurkacz’s shots “not up” during the breaker as the world No 10 ran to the net for a drop shot and managed to get it over the net. The point was called before Alcaraz could play his next shot so he hit the ball into the empty space of the court as last year’s Miami Open champion shared his disagreement with the umpire, crying out: “What?”

The Pole argued that he had reached the ball in time and put it back into play before it bounced for a second as a slow-motion video replay appeared to show he was correct. Alcaraz also looked in agreement as he decided to forfeit the point, which had been given to him as a result of the not up call, and replay it instead.

The gesture earned him a round of applause from both his opponent and the crowd, as fans took to social media to praise the teenager for his classy gesture. The world No 16 then won the point on the replay and went on to take the opening set tiebreak 7-5.

The second set also went to a tiebreak, won by the young Spaniard 7-2 to cement his place in his first-ever Masters 1000 final. As well as becoming the second-youngest Miami finalist, he also becomes the fourth-youngest ATP Masters 1000 finalist of all time.

And he can continue to break records in Sunday’s final, as a victory over Ruud would see him become the youngest ATP champion in the tournament’s history.

US Open Tennis: Where to now for Novak Djokovic?

Fans barred from Australian Open as Melbourne goes into lockdown