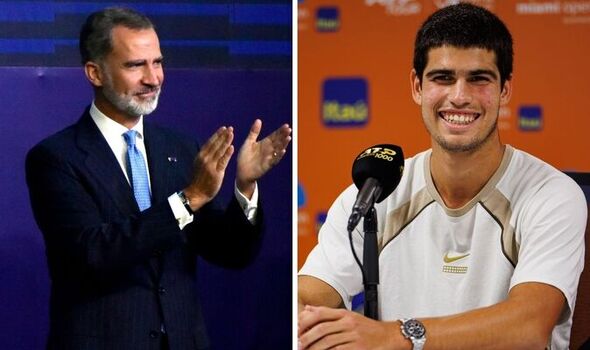 Future tennis royalty came into contact with an actual king when Spanish starlet Carlos Alcaraz received a phone call from his country’s monarch. King Felipe was one of those who contacted the teenager to congratulate him after his Miami Open success on Sunday.

Alcaraz, considered the biggest young male star in the sport, came of age over the past 10 days as he won the biggest title of his career in Florida. He dropped only one set throughout the entire tournament and secured the trophy with a confident victory over Casper Ruud in the final.

The 18-year-old was hailed for his talent and performances after that match, even receiving a congratulatory phone call from the King of Spain. He admitted that he was more nervous about his chat with the monarch than he had been on court.

JUST IN: Alcaraz wants Nadal clay showdown ‘to be the best’ after Miami win

The spotlight was on Alcaraz at this tournament, after reaching an ATP 1000 semi-final for the first time in the previous competition. That run at the Indian Wells Masters was ended only by Rafael Nadal, against whom the younger Spaniard has inevitably been compared.

In Miami, the teenager disposed of the likes of Marin Cilic, defending champion Hubert Hurkacz and third seed Stefanos Tsitsipas en-route to the final. There, he came up against another talented youngster in the form of the Norwegian Ruud, and was able to come out on top.

It was his third ATP title, having won the Rio Open in February and taken home the trophy at the Croatia Open in Umag last year. This victory, the biggest and most prestigious of the lot, saw him shoot up to 11th in the world rankings – a career high – and put him on the verge of breaking into the top 10.

Given that both his other titles prior to his victory in Miami had come on clay courts, now seems the ideal time for him to push on and make further progress up the rankings. The clay season begins now building up to the French Open in May.

Alcaraz’s coach Juan Carlos Ferrero previously said that the teenager feels most at home on a clay court. Plus, with several top players like Nadal and Daniil Medvedev currently out injured, he will have an even better chance of adding more trophies to his already impressive collection.

“All I can say is I got two titles on clay and one on hard court,” the young Spaniard said when asked what he feels his favourite surface is. “I feel very comfortable on both surfaces, so I don’t mind playing on clay or hard court.”