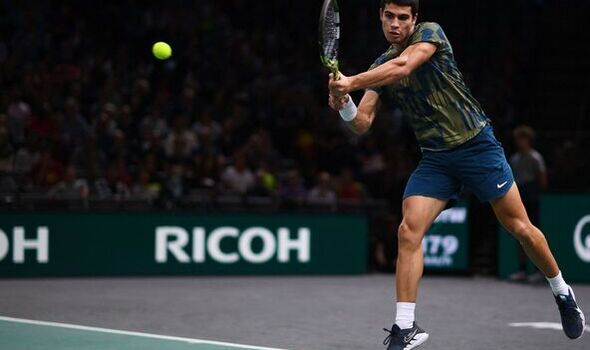 World number one Carlos Alcaraz powered his way into the Paris Masters quarter-finals by playing some impressive tennis during a 6-1, 6-3 victory over Grigor Dimitrov. The US Open champion can seal his world number one status for the year if he wins the ATP 1000 tournament on Sunday after the early exit of Rafael Nadal against Tommy Paul.

Alcaraz won his last-32 match against Yoshihito Nishioka in straight sets 6-4, 6-4 in a match which took only one hour and 12 minutes. He was again in imperious form against Dimitrov, winning the first set 6-1 in 28 minutes and despite being pushed further in the second set, pulled through 6-3

The Spaniard won the opening game after forcing his Bulgarian opponent into an error before complaining to chair umpire Greg Allensworth about somebody with a flashing camera in the crowd. The 19-year-old continued his quick start to the match racing into a 2-0 lead.

The next game was more competitive with Dimitrov serving and forcing the world number one into some impressive ground shots to double break his opponent. World number 28 Dimitrov did hit back in the fifth game – pulling back to 4-1 with a serve and smash combination.

Alcaraz was equally as impressive with his serve taking the following game with ease. The Spaniard broke his opponent for a third time to win the first set 6-1 within 28 minutes of play.

The US Open champion was ruthless with his shots and broke the Bulgarian’s serve at the first opportunity in the second set before storming into an early 3-0 lead. Trying to avoid a humiliating defeat, Dimitrov pulled a game back in his next service game and then forced the Spaniard into an error breaking the world number one at 3-2.

Despite Alcaraz playing some powerful shots, Dimitrov then held his serve levelling the second set at 3-3. The pressure was back on the world number one who made unforced errors in the resulting game but eventually showed his class to hold his serve.

After losing him momentum Dimitrov hit several unforced errors in his following service game resulting in the world number one breaking his opponent again and serving for the match. Making no mistake, Alcaraz powerfully finished the game at the first opportunity – winning the second set 6-3.

He will now take on the either Holger Rune or Andrey Rublev in the quarter-finals.

Novak Djokovic’s behaviour was branded ‘out of control’ by friend: ‘Should be ashamed’