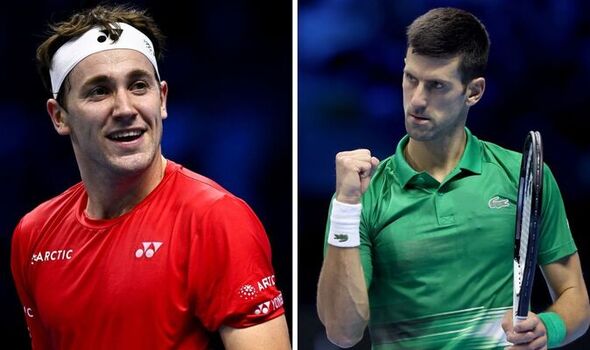 Casper Ruud has weighed in on the debate between who is currently the best player between in-form Novak Djokovic and world No 1 Carlos Alcaraz as he talked up a potential ATP Finals clash with the Serb. And the world No 4 appeared to side with Andy Roddick as he admitted he would let Djokovic play “for his life” while applauding the 35-year-old’s ability on indoor hard courts.

Ruud and Djokovic were the first men through to the semi-finals at the ATP Finals as they became the winners of their respective round-robin groups after clinching victory in their first two matches of the week. It means they can only face off in the final if they both make it there, but the 23-year-old already knows it will be a big ask to try and defeat the world No 8 in Turin if they do meet.

While piling praise on the five-time former champion at the ATP Finals, Ruud waded into the debate on who was the better player between Djokovic and current world No 1 Alcaraz and admitted that he thought the Serb was the “best player in the world” when it came to indoor hard-court tournaments. His comments came after retired pro Roddick admitted that Djokovic was still a greater player despite the current rankings.

“Tennis-wise, I think on this surface, he’s the best player in the world,” Ruud said after losing his first match of the week to Rafael Nadal on Thursday. “Like I said maybe earlier days as well, no offence to Carlos because he has the No 1 spot and will end the year No 1, but if we have to pick one on indoor hard court, depending on your life, I would choose Novak to play that set or match to win it, if it was depending on your life.

The third seed’s verdict came after seeing Djokovic in action during his 6-4 6-1 group match win over Andrey Rublev, and Ruud thought the 21-time Grand Slam champion was an even bigger favourite because of his lack of tournaments this year. The Norwegian explained: “I watched a little bit against Rublev. It was yesterday. It looked like he played phenomenal. I mean, seems like he’s in a great place both physically and mentally.

“I remember when I watched tennis on TV when I was young, he would have these insane years. I remember especially 2011 where he would win so much. I believe he came to the Finals and he was sort of worn out a little bit and he lost a little bit surprisingly and didn’t make it through.”

But he thought things would be different this time around, adding: “I guess now that he has not played so much this year, he’s more ready for this event. I guess it’s just one of nine or 10 events he has played this year. I’m sure he’s ready. He looks fresh, yeah, mentally and physically, like I said.”

Djokovic spent three months on the sidelines after winning Wimbledon as he missed the entire North American hard-court swing because of his unvaccinated status but he picked up exactly where he left off upon his return as he won titles in Tel Aviv and Astana before losing in the Paris Masters final. And Ruud knew he would have to produce something special to have a chance against the 35-year-old if they did meet in Sunday’s final.

“Just have to give credits to him. Looks like he’s playing well,” the nine-time title winner said. “In Paris it showed that he’s human as well, lost in the final, a little bit surprisingly to a younger, but also great player.

“Seems like he’s playing great. I hope of course I can play him. It means we have reached the final, both of us. I guess I will have to come up with something I have not been able to do yet in order to have a chance against him.”

Wimbledon final radio coverage: How to listen to Nick Kyrgios vs Novak Djokovic