Home » Tennis » ‘C’mon!’: Williams gets vocal on way to the fourth round at Roland-Garros

Paris: Even a 23-time grand slam champion needs to remind herself now and then how to play winning tennis.

Serena Williams employed verbal motivation, shouting at herself to help her recover from a 4-1 deficit in the second set of a 6-4, 6-4 victory over fellow American Danielle Collins in the third round of the French Open. 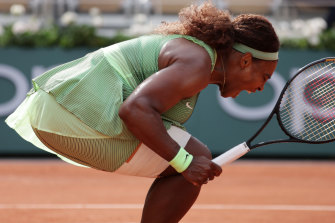 Collins also sarcastically said, “That’s excellent,” after shanking another shot following a long rally that appeared to conclude with an awkward bounce in the final game.

When it was done, Williams and Collins both smiled as they shared a friendly embrace at the net.

Collins said that she told Williams she would “love to see her win the whole thing.”

“She’s the greatest player of all time,” Collins added. “I think we all admire and love Serena, especially the American players. It was pretty surreal today to go out there and be playing against somebody I remember watching at age 9 and 10.”

Still chasing a record-tying 24th grand slam singles title, the 39-year-old Williams next faces 21st-seeded Elena Rybakina, who defeated Elena Vesnina 6-1, 6-4 to reach the fourth round for the first time at a major.

Aside from Williams, top women’s players continue to exit Roland-Garros. The latest to go home was third-seeded Aryna Sabalenka, who was upset by Anastasia Pavlyuchenkova 6-4, 2-6, 6-0.

Sabalenka had been the highest remaining seed after top-ranked Ashleigh Barty retired from her second-round match due to an injury on Thursday. Second-seeded Naomi Osaka withdrew after the first round, saying she is taking a break from competition for mental health reasons.

Sabalenka’s 39 unforced errors helped Pavlyuchenkova reach the fourth round for the first time since she made it to the quarter-finals in Paris a decade ago.

Pavlyuchenkova’s next opponent will be Victoria Azarenka, who beat 23rd-seeded Madison Keys 6-2, 6-2 in 70 minutes.

Russian player Yana Sizikova was released from police custody after being arrested on suspicion of match-fixing during last year’s tournament in Paris. The 26-year-old Sizikova denies the allegations.

Stefanos Tsitsipas advanced with his 36th match victory of the year, the most on the men’s tour, and he eliminated the last American in the men’s draw. Seeded fifth, Tsitsipas rallied past No.31 John Isner in a night match, 5-7, 6-3, 7-6 (3), 6-1.

Earlier, play was interrupted briefly by rain on all courts besides the main stadium, where the roof was closed. Federico Delbonis said the interruption helped him calm down after stress started to get hold of him toward the end of the second set of his match with Fabio Fognini. 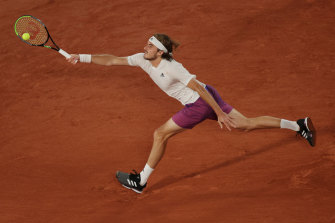 Stefanos Tsitsipas at full stretch in his third-round victory at Roland-Garros.Credit:Getty Images

Fognini required treatment from a trainer after bloodying his hand by punching his racket strings in frustration multiple times early in the second set.

Kei Nishikori followed up two consecutive five-setters with a one-set victory, reaching the second week of the clay-court grand slam for the seventh time after qualifier Henri Laaksonen retired with a thigh injury while trailing 7-5.

ATP Finals 2020: Who are Nadal and Djokovic playing in the semi-finals? FULL schedule