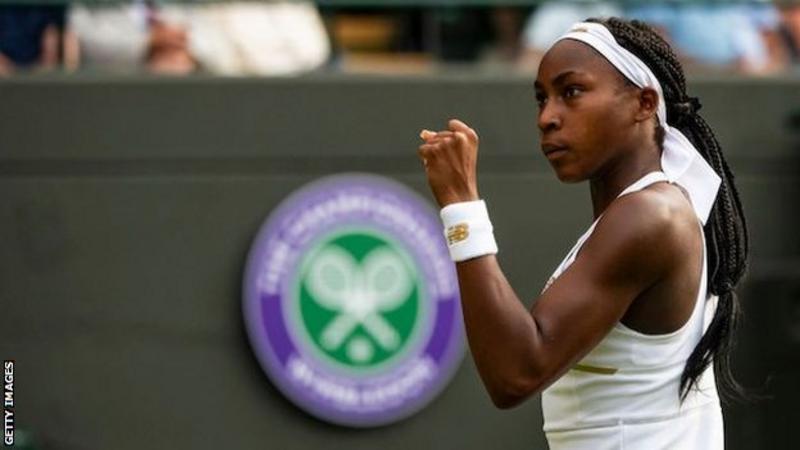 Coco Gauff says she had depression because of the “pressure that she needed to do well” little more than a year before she stunned the tennis world at Wimbledon in 2019.

American Gauff, then 15, reached the last 16 at the All England Club, most notably defeating five-time champion Venus Williams in the first round.

“I was struggling to figure out if this was really what I wanted,” Gauff said.

In a piece for Behind the Racquet, the 16-year-old added: “I always had the results so that wasn’t the issue, I just found myself not enjoying what I loved.”

In qualifying for Wimbledon, Gauff became the youngest player in the Open era to qualify for the main draw.

But she says achieving firsts in the past contributed to her struggles.

“Throughout my life, I was always the youngest to do things, which added hype that I didn’t want,” she said.

“It added this pressure that I needed to do well fast.”

She added: “I realised I needed to start playing for myself and not other people. For about a year I was really depressed. That was the toughest year for me so far.

“When you are in that dark mindset you don’t look on the bright side of things too often, which is the hardest part.

“I don’t think it had much to do with tennis, maybe just about juggling it all. I knew that I wanted to play tennis but didn’t know how I wanted to go about it.”

Such was her unhappiness, Gauff considered taking a year off tennis – a decision she is glad she never made.

“Choosing not to obviously was the right choice but I was close to not going in that direction,” she said.

“I was just lost. It took many moments sitting, thinking and crying. I came out of it stronger and knowing myself better than ever.”

‘I don’t like being compared to Serena or Venus’

After her Wimbledon run and similar performances at the US and Australian Opens, Gauff says she is “getting used to” the idea of being a role model. However, she admits that brings pressure of its own.

“I know people are watching every move,” she said. “For the most part it is easy because I am always just being myself, not putting up a front, which people seem to be OK with.

“I don’t feel like I have to flip a switch or anything. In the beginning I thought I had to be perfect but I’ve done a lot of soul searching and moved past it.”

But she dislikes comparisons with Serena and Venus Williams, who share 30 Grand Slam singles titles between them and were her inspirations to get into the sport.

“For me, one of the biggest things is to continue breaking barriers,” she said. “At the same time, I don’t like being compared to Serena or Venus.

“First, I am not at their level yet. I always feel like it’s not fair to the Williams sisters to be compared to someone who is just coming up. It just doesn’t feel right yet, I still look at them as my idols.

“With all their accolades, I shouldn’t be put in the same group yet.

“Of course I hope to get to where they are but they are the two women that set the pathway for myself, which is why I can never be them.”