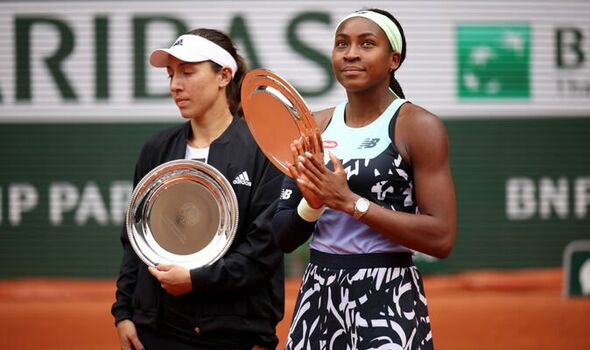 Coco Gauff targeted winning her first Grand Slam title at Wimbledon after losing the doubles and singles finals at the French Open. The teenager and her fellow American Jessica Pegula lost 2-6 6-3 6-2 to French pair Caroline Garcia and Kristina Mladenovic on Sunday.

It was her second defeat in under 24 hours on Court Philippe-Chatrier after she went down 6-1 6-3 to world No.1 Iga Swiatek.

Gauff, who shot to fame as a 15-year-old at SW19 in 2019, also lost her first Grand Slam final in last year’s US Open women’s doubles final.

But the new world No.13 sportingly congratulated the French winners and said: “I had a lot of fun – it was the best atmosphere I have ever played in. Hopefully we can play another final – maybe at Wimbledon. That is my third final – hopefully, I can get one.”

Swiatek extended her winning streak to 35 matches to equal the best run this century set by Venus Williams in 2000.

The Pole plans to take time off back home in Warsaw and is scheduled to play her next tournament at the Bett1Open in Berlin in her build-up to Wimbledon. But the 21-year-old, who has not got beyond the fourth round in her two appearances in SW19, reckons the pressure will now be off on the grass.

“My coach (Tomasz Wiktorowski)believes I can win more matches on grass,” she said. “I don’t know about that yet. But I would like to add like one or two. Grass is always tricky. I actually like the part that I have no expectations. It’s something kind of refreshing.

“I’m going to just prepare my best and maybe with his experiences that he had with Aga Radwanska, it was her favourite surface, so maybe he’s going to give me some tips that are actually going to be really helpful, and I’m going to enjoy playing on grass a little bit more.”