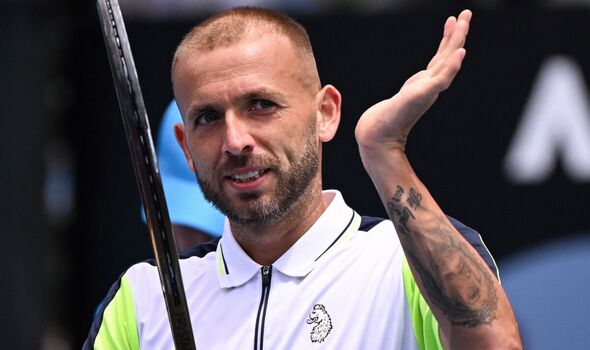 Dan Evans called for a change to the “worst rule ever” after his furious French opponent accused the chair umpire of “lying” over a controversial call at the Australian Open. Jeremy Chardy went ballistic when a ball fell out of his pocket on a break point and German chair umpire Miriam Bley called a let after the point – and then reversed her decision.

The London-based Frenchman accused the German of making “the biggest mistake of the Australian Open”. And when the supervisor was called, Chardy accused Bley of “lying” over her version of events.

“I didn’t see it happen. It was just a pretty awkward situation. The only part I wanted to clear up was I was just simply asking the umpire why it was a let. I didn’t see any of what happened, because obviously the play was all in the other corner.

“I think it went on a bit too long, and it got cleared up, and then did a good job of holding.” Chardy was correct to claim play should have been stopped when the ball fell out onto the court.

But Bley claimed she did not see the ball until after Chardy had slapped his forehand into the net. Evans said: “I think the rule should be if a ball comes out of your pocket, you lose the point. I don’t know why you’re giving people the chance. He missed the ball.

The flashpoint happened when Evans had a breakpoint at 3-3 in the first set. When Bley explained her decision to Chardy, the Frenchman exploded with rage. “We play with someone who cannot umpire,” he said. “In my life, 20 years I’ve had one umpire bad like you.

“Where are you looking? You looking at the birds? The clouds? It’s the biggest mistake of the Australian Open. There’s not one umpire on tour that does this mistake, not one.” At that point Bley told Evans: “I am calling the supervisor to explain the decision. He doesn’t want to listen.”

When the supervisor told Chardy that it was “the umpire’s call” after she explained her decision, the French left-hander ranted: Bley explained her version of events to the supervisor, Chardy said: “If you don’t confirm that I called let, I lose all respect for you. She’s lying.

“I hit the forehand, and the ball dropped from my pocket. He hit the backhand, and I hit another forehand before she realised the ball had fallen from my pocket. I still lose a point. I was angry because she should stop straight away, and she says she didn’t even see the ball.

“I don’t know what she’s doing because she doesn’t call in or out. So I was pissed, and I was even more pissed when she didn’t tell me she made the mistake. It’s nothing against him (Evans). It’s the umpire to stop.

“He could say something, but it’s not his job to stop the point. We already tried to play the point. So the umpire has only one thing to do. It’s a big mistake from her. Nothing with Dan.”

Asked if Bley should be punished, 2013 quarter-finalist Chardy laughed: “It’s what I said to her. If I miss a point, then break my racquet, I will get fined. You can do a huge mistake, and nothing will happen to you. I think this is not fair.”

From Novak Djokovic to Jessica Pegula: Ten players to watch at the Australian Open 2022

Where can I watch Australian Open men’s final?