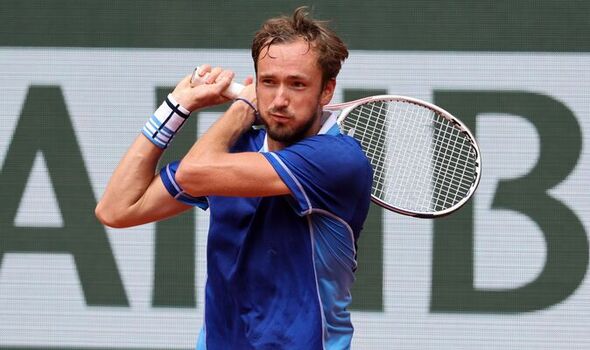 Daniil Medvedev has admitted the “toughest thing in tennis” comes at the French Open, rather than playing against the likes of Novak Djokovic, Rafael Nadal and Roger Federer. The world No 2 is through to the third round in Paris and addressed the reason it took him a while to learn to “love playing in France.”

Medvedev is fresh off the back of hernia surgery and playing just his second tournament since March at the French Open. Having lost his first match back in Geneva last week, he is back to his best in Paris and is yet to drop a set en route to the third round.

The world No 2 has developed a strong relationship with the Parisian crowd but admitted there was once a time he struggled to play in France, as he had never won a match at the French Open until his quarter-final run last year. “With French crowd also it was up and down sometimes. I played, I think three first times I lost in Roland Garros was against French guys, and it was tough,” he said.

“They were definitely not cheering for me. Playing, yeah, playing against a French guy in Roland Garros is one of the toughest things in tennis.” The 26-year-old also said he learned to love the French fans after having some success at other tournaments in the country, including his Masters 1000 win in Paris Bercy two years ago.

JUST IN: Nadal and Djokovic to make different French Open requests if they meet

And Medvedev admitted he was hoping he could learn to feel the same about Australia, after slamming the crowd in the final he played against Rafael Nadal at the start of the season. The runner-up in Melbourne had claimed that this kid inside him “died” after the fans’ “disrespect” as he blew a two-set lead to the Spaniard when playing for the title.

“Talking about Australian crowd, it was just this year. If not, usually I’m super happy to come to Australia, play there. Let’s see how it’s going to be next year,” he said of the issue he had with the crowd in the Aussie Open final.

“Maybe again, I know I did some mistakes also. It’s not like they just chose me and said, ‘We’re going to be against him’.”