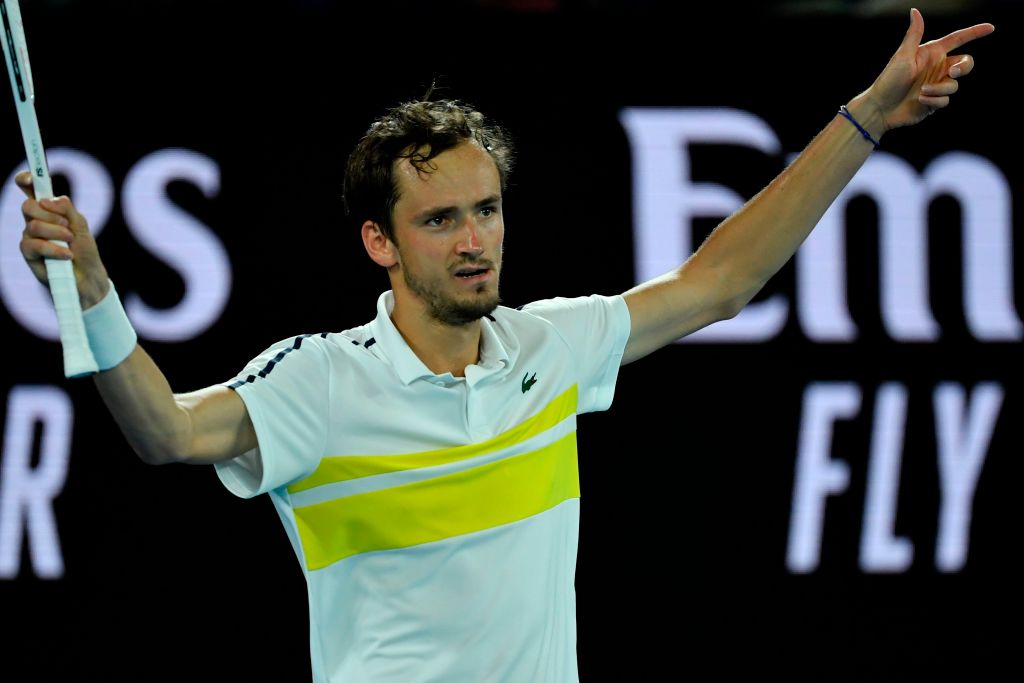 Daniil Medvedev turned up the heat on world No. 1 Novak Djokovic ahead of the Australian Open by claiming it’s his opponent who has more to lose but the top seed warned he won’t just ‘hand over’ a major title.

Medvedev, who thumped Stefanos Tsitsipas in straight sets in Friday’s semi-final, is on a 20-match winning streak, including 12 consecutive wins over top-10 players.

Djokovic, the top seed from Serbia, has a streak of his own to protect in the final.

He has never been beaten in the final of the Australian Open in eight previous appearances, while he is looking to close the gap on Roger Federer and Rafael Nadal at the top of the all-time Grand Slam leaderboard.

A win for Djokovic would see him close the gap on 20-time major winners Federer and Nadal to just two titles and Medvedev – targeting a maiden Slam win – thinks all the pressure is on his opponent heading into Sunday’s final.

‘It’s him who has all the pressure. Getting to Roger, Rafa, in the Grand Slams.

‘So I just hope I’m going to get out there and show my best tennis. I can beat some big names if I play good.

‘He has, for sure, more experience, but more things to lose than me.’

This will be Medvedev’s second Grand Slam final after losing to Rafael Nadal in five sets at the 2019 US Open – a match he feels he took a lot of experience from.

‘I took a lot of experience,’ added Medvedev. ‘It was my first Grand Slam final against one of the greatest.

‘Sunday will be against one of the other greatest. US Open was a crazy match. We’re going to see Sunday, we can’t know before the match what’s going to happen.’

Djokovic leads their overall head-to-head 4-3 but Medvedev has won three of their last four meetings. He is, however, yet to beat any of the ‘Big Three’ at Grand Slam level.

There is no question in Djokovic’s mind just how good Medvedev – who he described as a ‘master chess player’ – is and claimed he’s the ‘player to beat’.

He isn’t, however, willing to just hand over major titles to the younger generations.

Djokovic told Eurosport on Thursday: ‘Pressure is always there, it’s what we do. Everyone talks about the new generation coming and taking over us, but realistically that isn’t happening still.

‘We can talk about it all day but with all my respect to the other guys, they still have a lot of work to do. I’m not going to stand here and hand it over to them. I’m going to make them work their ass off for that.’