Alex de Minaur warmed up for his home grand slam with an ATP title on Wednesday, winning the Antalya Open when fellow finalist Alexander Bublik retired with an ankle injury after just seven minutes' play.

De Minaur, Australia's highest-ranked player at No.23, was 2-0 up in the first set when the Kazakh pulled out. 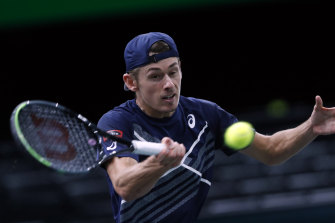 Alex de Minaur won his fourth ATP title in a walkover after Alexander Bublik retired hurt at the Antalya Open in Turkey.Credit:AP

"It was a bittersweet moment last year so hopefully a year later I can come back stronger and have a great Aussie summer," he said.

"I am really looking forward to going back home and (to) play in front of the home crowd, that's for sure."

"I twisted my ankle yesterday… I was in the physio room for three hours yesterday and I tried to get ready for the match today," he told the ATP Tour website.

Bernard Tomic, meanwhile, has qualified for his home grand slam after a tough three-set win over compatriot John-Patrick Smith. 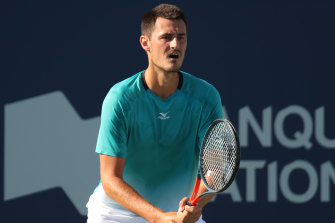 Bernard Tomic will be looking to advance past the opening round at Melbourne Park for the first time since 2017.Credit:SIPA USA

Tomic, who hasn't advanced past the the first round at Melbourne Park since 2017, booked his ticket through qualifying for the first time after missing out last year and in 2018.

The first all-Australian final-round qualifying showdown in almost three decades finished 6-4, 5-7, 7-6 (10-7) in Tomic's favour, coming in at just under 2 hours and 50 minutes. It was Tomic's third three-set match in as many days. Two of those had gone to final-set tie-breakers, which the 28-year-old admitted had taken a toll.

"He's a dangerous player," Tomic told tennis.com.au of Smith. "He had nothing to lose, so today was tough.

"I was fighting and competing for every point, but it was tough," Tomic said. "I'd like to play a little more aggressive, but when the body is not there it is tough to play aggressive."