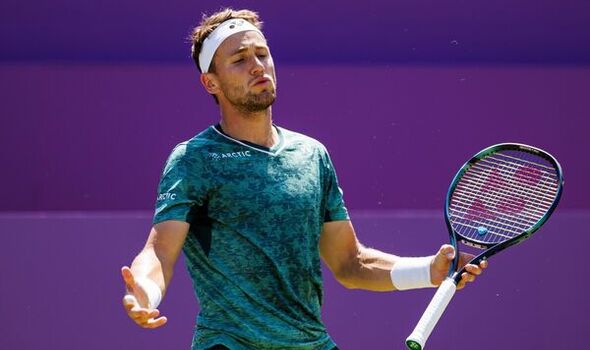 Wimbledon No.3 seed Casper Ruud may have handed Novak Djokovic and Rafael Nadal a psychological boost heading into the tournament by admitting he is still not feeling comfortable on grass. The Norwegian made it to the final of the French Open earlier this year before he was beaten in straight sets by Nadal, and is expected to be one of the big two’s main challengers at SW19 this year, along with the likes of Matteo Berrettini and Carlos Alcaraz.

But he has struggled on grass in the past, and is yet to make it past the first round in Wimbledon in his career. On Thursday Ruud faced Belgian Zizou Bergs in an exhibition match at the Giorgio Armani Tennis Classic at the Hurlingham Club and lost 6-4 6-4 to his lower ranked opponent, who pulled out all the stops with some sizzling forehands and an outrageous through-the-legs trick shot.

And speaking afterwards, Ruud admitted he is still struggling to adapt to the different surface. “This is my first day on grass again and I think it was a pretty good match,” he said. “Let’s see if I can get some more hours on the surface and hopefully I can at least win one match at Wimbledon this year.

“For me the movement is the biggest challenge. The bounce is much lower than what I’m used to. It’s not playing ridiculously fast anymore but I find it difficult to find it comfortable moving around, and fear slipping and injuring myself. 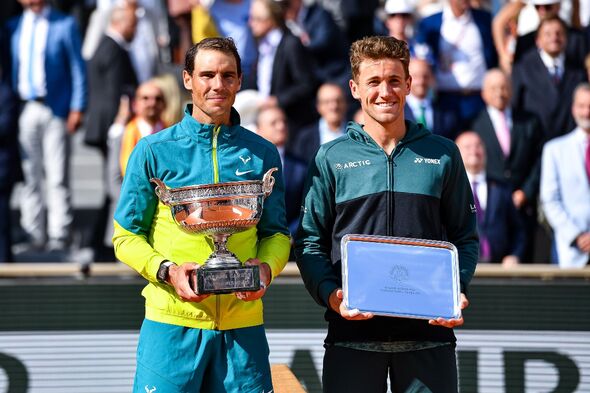 “I don’t know how to explain it, but every time you take a big step or push off from the corners you feel like you’re ruining the court, and it’s not a nice feeling! I need to get used to that.”

Ruud’s coach is Nadal’s uncle Toni, and the 23-year-old said he had not had too much contact with his mentor since his French Open final. “I think Rafa has enjoyed some time off and me too, so I guess I’ll see him in Wimbledon,” he added.

“Toni said congratulations on the French Open and to keep going, and that Rafa will retire soon so hopefully some other players can have some success in this tournament! But he has not said much else since.”

Ruud was also asked about the decision to strip Wimbledon of ranking points, and gave his view on the controversy. “It is obviously unfair for those who cannot defend the big points from last year,” he continued. “It doesn’t affect me personally because I went out of the first round, so I’m not going to feel too bad about it, but I feel for the other guys.

“Wimbledon is still Wimbledon, it’s a Grand Slam, so I think the prestige counts more.”