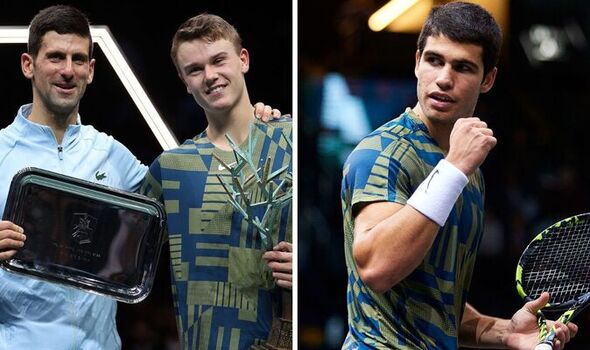 Novak Djokovic doubled down on his comments likening Holger Rune to his younger self after losing to the 19-year-old in the Paris Masters final. The Dane came from a set down to stun Djokovic 3-6 6-3 7-5 and lift the biggest title of his career, and the world No 7 has now also compared Rune to his fellow teenage star Carlos Alcaraz.

Rune became the youngest man to win the Paris Masters in 36 years as he upset defending champion Djokovic in three sets to hand the Serb his first loss at the tournament since 2018. Ahead of their clash in the final, the 35-year-old had admitted that Rune reminded him of his younger self, and he has now reiterated his point after losing to the teenager.

Asked if he felt as though he was playing against himself at times during the two-hour-and-29-minute final, the sixth seed said: “I said that yesterday. I think he does have a lot of elements that remind me of myself when I was his age.”

And the 21-time Grand Slam champion also compared Rune to fellow 19-year-old star Alcaraz, who also beat Djokovic in their only meeting at the Madrid Masters earlier this year. Rune is set to make his top 10 debut on Monday thanks to his win in Paris, and he and Alcaraz will become the first teenage duo in the top 10 since Djokovic and Andy Murray 15 years ago.

As the only players their age to see such success, Djokovic thought they had similar attributes. “They are similar in terms of physicality. I think they are both really fit. They train very hard. They are very dedicated guys. They defend, both of them, extremely well,” the 35-year-old said.

“Rune has a better backhand. Alcaraz has a better forehand. But they are both improving on those shots that maybe are not as good as maybe other shot. But they, you know, when I say, you know, is ‘not as good,’ meaning it’s not a huge difference. I mean, they have great shots. I mean, great forehand from Rune or great backhand from Alcaraz.”

Alcaraz recently became the first teenager to win a Grand Slam since Rafael Nadal in 2005, and is also the youngest world No 1 in ATP history. And Djokovic thought both teenagers’ mentality set them apart.

“They are very complete players for 19-year-olds. It’s quite impressive,” he said. “Also their energy on the court, just wanting, motivating themselves and wanting to do well and staying mentally present, it’s impressive.”