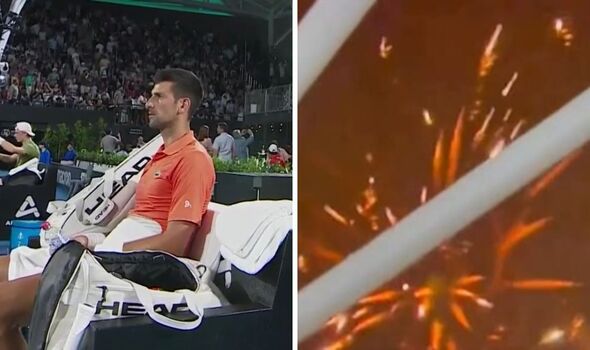 Novak Djokovic’s quarter-final match at the Adelaide International was briefly paused on Friday night for a firework display early on in his clash with Denis Shapovalov. As the pair sat down with the top seed leading 2-1 in the opening set, they were forced to wait eight minutes in an extended changeover until the fireworks had finished as the Serb could be seen pacing around the court while the 23-year-old tried to stay warm on his bench.

Djokovic and Shapovalov had barely started their quarter-final match during the Adelaide International night session on Friday when they were forced to grind to a half for eight minutes for a firework display. The two men had contested just three games when they were given an extended eight-minute changeover to fit in with the badly-timed showcase.

It had already been an exciting affair with the top seed needing 11 minutes to hold serve in the opening game of the match as he fought off two break points but momentum as stopped by the fireworks as both players were seen sitting at their benches while the display could be seen in the sky behind them. After what had already been a lengthy pause, the 35-year-old then opted to stand up and keep warm, pacing around the court.

Meanwhile the world No 18 tried to stay warm on his bench, wrapping himself in towels to wait out the disruption. Shapovalov could be seen rubbing his temples as he attempted to stay locked in as the players were forced to wait eight minutes instead of the usual 90 seconds for a changeover.

It’s not the first time fireworks have distrupted a match Down Under, as Australia Day fireworks have previously led to long changeovers at the Australian Open. “Also once in a whole at the AO the firewoeks come out on Australia Day,” a Tennis TV commentator remarked during the delay in Adelaide.

And the co-commentator remarked that the Adelaide International appeared to be using the same tactic as the Grand Slam with an extended changeover. “Usually if that’s the case, they usually do schedule it with the tennis so they say listen we’re going to do an extended changeover time, which it does feel like it is,” he said.

Rafael Nadal was famously disrupted by Australia Day fireworks back in 2010 while facing Andy Murray in the quarter-final. The Spaniard tripped and fell following a nine-minute delay for the display during the match and was forced to retire while 3-6 6-7(2) 0-3 down already.

Three years later during the women’s singles final, Li Na tripped and hurt her ankle following a lengthy changeover for the Australia Day fireworks. She had a medical time out before opting to continue but went on to lose to Victoria Azarenka 4-6 6-4 6-3.