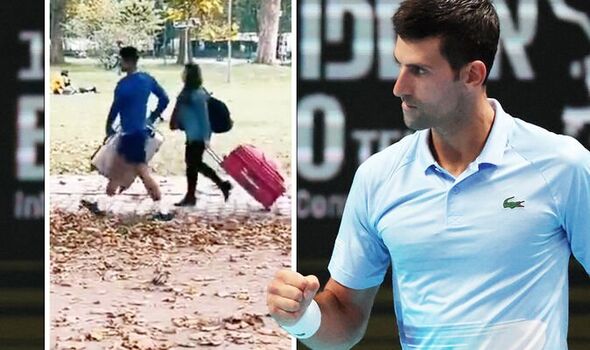 Novak Djokovic was been praised for a heartwarming act after helping an elderly woman with her luggage after arriving in France for the Paris Masters. The Serbian is back to defend the title he has now captured six times, most recently in 2021 when he beat Daniil Medvedev in three sets.

With the ATP Finals in Turin to follow next month, Djokovic is aiming to finish his season on a high after a turbulent time in 2022. His year started in controversial fashion, with the former world No 1 deported home the day before the Australian Open began following an explosive visa row that centred around his refusal to be vaccinated against Covid.

He was permitted to play in the French Open, where he was knocked out by Rafael Nadal, and then captured his 21st Grand Slam title by winning Wimbledon. However, he was then forced to withdraw from the US Open, and two other tournaments in America, again because of not being jabbed.

But he is now back on track and looking to put the early year struggles behind him. And he has been widely praised for his heartwarming recent actions, with the all-time great spotting a female struggling to carry a large suitcase across a park in Paris. He responded by taking the case of her and hauling it across the green himself.

Footage of the incident was posted on Twitter by @iamjomoreira, who wrote: “It’s a very classy gesture on his part and proves that no matter who you are and how much you touch in life, you have to know how to stay humble.”

And fellow fans of the star seemed to agree, with @AnneMazza17 writing: “Imagine struggling with your luggage and this nice young man helps you, they probably have no idea who he is,” while @DjokovicFan_ added: “The kindest.”

Djokovic, 35, will play his last-32 match tomorrow, with his opponent yet to be confirmed. He’s seeded sixth for the tournament, with Carlos Alcaraz billed as the favourite by organisers.

The Serbian will be desperate to play at the Australian Open in early 2023 after missing out this year, but his hopes remain up in the air. However, he will be aiming to build up momentum ahead of the Grand Slam if he gets the green light to feature, and will be eyeing a deep run in Paris.

Serena Williams set to make return at Eastbourne after year out