Two male players, American Don Budge, and our own immortal Rod Laver, etched their names in history as the holders of a grand slam, the winner of the championships of Australia, France, Wimbledon and USA, in a calendar year. Laver, in fact did it twice, once as an amateur, and once as a professional.

The two closest to emulating that feat were Aussies Lew Hoad and Jack Crawford, also great players, who both fell at the very last hurdle, the final of the US Open. 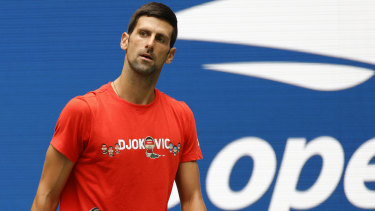 Novak Djokovic looks on during a practice session prior to the start of the 2021 US Open.Credit:Getty Images

Which fate awaits Novak Djokovic at the US Open, which begins on Monday? With history on the line, will he seal his greatness, or, too, fall agonisingly short?

As Aussies, though, we will be transfixed by the quest of women’s favourite Ash Barty, Wimbledon champion and world No.1, as she endeavours to take the third step towards a “career” grand slam. And rightly so.

Yet the main narrative, the biggest story of the year in tennis, if not all of sports, surrounds Djokovic’s quest to win the calendar grand slam. Not only would he achieve what neither Roger Federer nor Rafa Nadal were able to do, it would break the deadlock he currently shares with Federer and Nadal, with all sitting on 20 majors, the metric which most pundits, including myself, believe is the truest in determining the GOAT – the greatest of all time.

Let’s take a closer look at 2021, and the numbers. At the beginning, on the back of the humiliation of Djokovic being defaulted at the US Open, Federer and Nadal were fully committed to the tour and both sitting on 20 majors, with Djokovic, just one year younger than Nadal, in their wake on 17. Plus, Nadal was the overwhelming favourite for the French Open, with Federer well in the mix for Wimbledon.

Djokovic set aside the backlash from New York and came to Australia with renewed spirit. He even started a player association in his sparing time. His lopsided victory over Daniil Medvedev, for his ninth Australian Open title, was the best answer to his critics, and moved his number to 18 in the GOAT race.

On to Roland-Garros, which was extraordinary for two reasons. The first was that Federer chose not to play the second week in order to save himself for Wimbledon. This decision raised a lot of eyebrows, including my own, but Federer certainly had enough credits to get away with it.

The second was not Djokovic’s comeback victory from two sets down over Stefanos Tsitsipas in the final, but his stunning match with Nadal in the semis. To win, only his absolute best would give him a chance. He delivered, with that third set the best set of tennis I have ever seen. That second French Open moved him to number 19.

On to Wimbledon, after only a two-week break. With Nadal absent, all eyes were on Federer who, after looking in good form, lost in the quarter-finals in straight sets to Hubert Hurkacz. From that shock, attention swiftly moved back to Djokovic. Once again he delivered, emphatically winning his sixth Wimbledon, and joining Federer and Nadal on number 20. 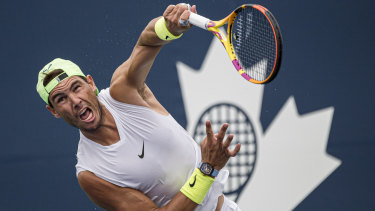 From there the focus was the Olympics, with Djokovic endeavouring to send a gold medal, like Federer and Nadal, to the pool room. It was not to be, and much has been made as to whether such profound disappointment to the proud Serb will hinder his mental state in New York. My take is the opposite. After such success, and the much publicised adulation by so many Olympians, although losing in Tokyo was far removed from what he wanted, it was maybe what he needed. It reminded him that nothing is a given, and that he needs to regroup for his date with destiny.

Now the US Open is nigh. Nadal is absent and Federer is having more knee surgery. Sadly, and harsh as it may seem, the magical era of “The Big Three”, and the three-way GOAT race, has ended. We can but hope that we will see Roger grace the courts once more but, by his own admission, it’s unlikely to be vying for more major titles.

However, Rafa’s situation is different. As he puts it, himself, he has two more “exciting” years left. That’s code for winning one or two more French Opens. So, for me, it’s now down to a two-way GOAT race, unless all are beached on 20, which no fair-minded sports lover could begrudge. Only when the sun sets on the sum total of their entire careers will we truly know the answer.

Therefore, eyes in New York are on Djokovic. He is the favourite and has the chance to complete this year what we haven’t seen in men’s tennis for over 50 years, and to move from 17 to 21 alone and atop the pedestal, for now, on the back of a calendar year grand slam.

In his way are the far younger lions … Andrey Rublev, plus Medvedev, Tsitsipas and Olympic gold medallistAlexander Zverev, all in good form and, importantly, a trio having tasted the bitterness of defeat in a grand slam final, an experience they will have learned much from.

My expectation is that Djokovic will be in the final, facing one of them. The pressure, with a grand slam on the line, will be something else.

Let’s watch it all unfold.