Novak Djokovic’s entry into Spain days before arriving in Melbourne is now being investigated by the Spanish government, according to a local media report, with the Australian government poised to announce its own decision on the player’s Australian visa on Thursday afternoon.

As the world waits to hear Immigration Minister Alex Hawke’s decision, the International Tennis Writers Association said it was “deeply concerning” the 20-time grand slam winner did not inform staff at French newspaper L’Equipe he was COVID-positive when he posed for photos two days after becoming infected. 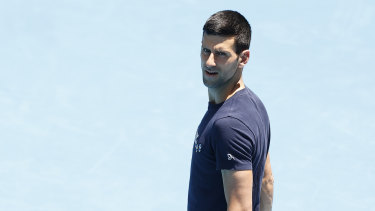 The world No. 1 travelled to Spain in late December to train before the Australian Open. Since September 20, Serbian citizens have been required to present a vaccine certificate or medical exemption to enter Spain.

Local media outlet COPE said Spanish authorities were now investigating whether he requested special permission to go to Spain, given he was training and may not have been involved in “necessary work” or “high-level sporting events” which are considered valid reasons for entry under Spanish law.

“The Ministry of the Interior has confirmed that they have also asked the Police [about Djokovic’s entry to Spain], while the Ministry of Foreign Affairs has done the same,” COPE reported.

The federal government will likely announce its decision on Djokovic’s visa on Thursday afternoon, when the computerised Australian Open draw is also scheduled to be conducted.

Australian immigration officials are looking into a series of errors and discrepancies including his breach of isolation requirements in Serbia, the incorrect statements on his travel entry form and inconsistencies on the date of his COVID-19 test.

Mr Hawke is separately considering whether to cancel Djokovic’s visa on the grounds that prior infection of COVID-19 in the past six months is not a valid exemption for being unvaccinated. But Mr Hawke could also consider whether to cancel the Serbian star’s visa on character grounds, informed by the Home Affairs probe.

Djokovic admitted on Wednesday he conducted a photoshoot and interview with a French journalist two days after he tested positive to COVID-19, prompting a critical statement from the International Tennis Writers Association.

“The news that Novak Djokovic did not tell one of our members – and the rest of the L’Equipe team on the day – that he had tested positive for Covid-19 is deeply concerning,” the association wrote in a statement.

“As journalists, we take great care to adhere to all COVID-19 rules in place and we would expect all players to do the same. Furthermore, it should be noted that journalists have to be fully vaccinated to travel to Melbourne for this year’s Australian Open.”

Serbian President Aleksandar Vucic said he would not publicly pursue anti-vaxxers but that he was proud Serbia was able to help Novak Djokovic. “We did our job, our job was to help the citizens of Serbia and I am proud that we were able to help one of our best sportspeople in a professional manner,” Vucic told state broadcaster Radio-Television of Serbia in a studio interview conducted early on Thursday (AEST).

He said he had spoken to Djokovic, whom he has known for a long time, a few times in recent days.

“I’m not sure he always agrees with everything I do,” Mr Vucic said. “I am a man who believes that it is necessary that people are vaccinated. I will even take the fourth [COVID-19 vaccine]. I think that has saved thousands of lives in this country. I am not the kind of person to lead the chase against those who don’t want to get vaccinated, for I don’t need their votes, but that is our fault.”

“How is it that a … visa was granted in the first place?” he said. “This has been diabolical for Australia’s reputation, just in terms of our competence here and it is extraordinary that – as we are speaking – we still don’t know what the decision will be.”

“The decision should have been made before he was granted a visa. Either he was eligible or he wasn’t.”

Spain backs away from quarantine criticism, but maintains ‘solidarity’ with players