The Australian splash that started with Alexei Popyrin rippled through the night with Alex De Minaur joining his friend in surging into the third round of the Australian Open.

Inspired by Popyrin’s effort early in the day, de Minaur found depths to his game he didn’t know he had to beat French veteran Adrian Mannarino 7-6, 4-6, 6-4, 6-1 and set up a third round clash with another Frenchman, Benjamin Bonzi. 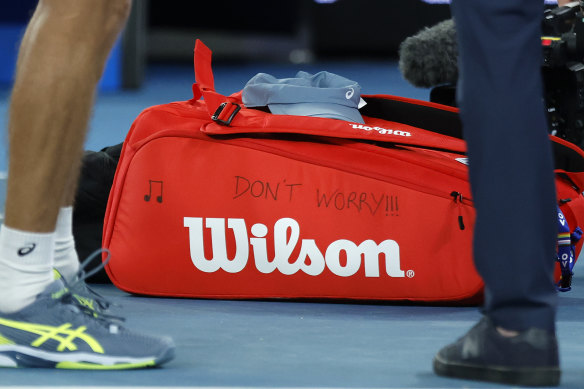 de Minaur said he was “100 percent” driven by Popyrin’s effort earlier on the same court.

“What Poppy did today was unbelievable. We have grown up together it’s so great to see him doing it on the big stage … I was glad I was able to pull through,” De Minaur said.

“I dug really, really deep today. I found an extra level I probably didn’t know I had.

“Geez I enjoyed every second of it, it was a battle. I was on cloud nine for the last set and a half.”

de Minaur’s racquet bag has the lyrics of Bobby McFerrin’s song written on it. One side reads “Don’t worry”, the other “Be Happy”.

For a fella prone to getting down on himself he sings the song in his head on court to remind himself to lighten up. The song with the reggae rhythm is a bit of an earworm so once it gets in your head it’s hard to shake.

He was perhaps starting to whistle the tune in the third set on Thursday night when Mannarino had firstly levelled the match at a set a piece after de Minaur’s bright start to the match, and then had started to draw away from the local boy. 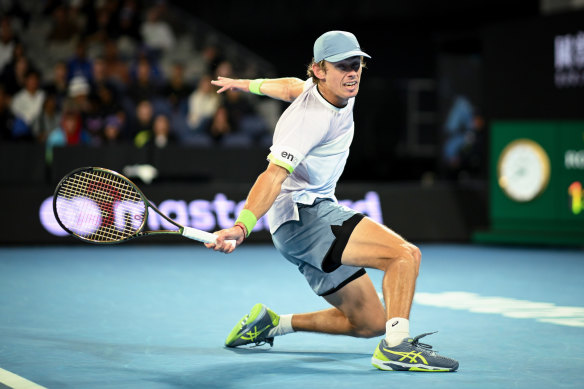 Mannarino is the sort of veteran journeyman who does not go away. Last year here he lost to Rafa Nadal in three sets but in the opening set he pushed it to a tie-breaker that went to 16-14 before the Spanish champion prevailed. He knows how to fight.

With his short backswing, punchy style Mannarino had deceptive pace and range on his shots, and just kept the ball alive. de Minaur lost certainty in his play and Mannarino got on top.

de Minaur was stressing. You could almost hear the song in his head …. “here’s a little song I wrote, you might want to sing it note for note, don’t worry.”

de Minaur relaxed and stopped trying to win the game in single shots and played the match. He readjusted, was happy to draw the rallies longer and managed the points better.

From half-way through that third set he lifted a cog and it was Mannarino who started to falter and go inside himself.

Emboldened, de Minaur sniffed the change and moved up the gears. He started hitting winners. He was pushing Mannarino around the court and hurrying him.

It was Mannarino who was starting to make the errors he hadn’t earlier on. de Minaur started to win easy points and the momentum built to be irresistible in that last set and a half. He started running between points to hurry to the next serve or return to keep the game going lest the momentum disappear.

It didn’t. After the grinding hour-long sets to start the night the match was suddenly over in a trice.

By night’s end de Minaur could walk off court singing have his own little turn on Bobby McFerrin’s lyrics:

Here’s a little game I play.

You might want to watch it night and day

Novak Djokovic wife: Who is the tennis star married to?