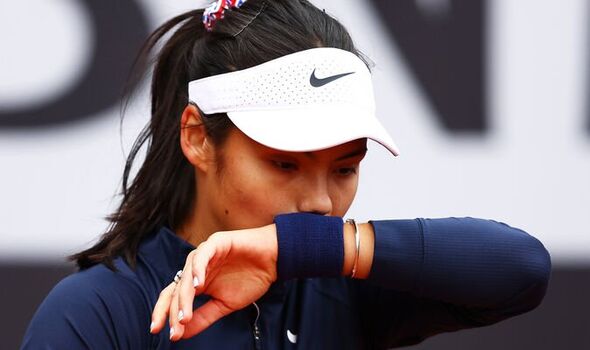 Emma Raducanu said she felt “redundant” as she struggled to cope against Marketa Vondrousova in Saturday’s Billie Jean King Cup clash. It was only the teenager’s second professional game on a clay court and, to make the job even harder, she was suffering with a painful blister on her foot.

The 19-year-old won on her debut on this surface a day earlier, as she dispatched Tereza Martincova in straight sets to keep Great Britain in the tie. However, that success came at a cost as later that day she discovered the blister which caused her a lot of discomfort in her second outing.

“It kind of showed up after yesterday’s match,” Raducanu explained after her defeat. “We’ve been managing it but as you saw I couldn’t really move or load either way and now it’s just about trying to get it better as soon as possible.”

She did not manage to hold her serve once throughout the match, though a big reason for the one-sided scoreline was her opponent. Vondrousova is in imperious form, and recorded another impressive victory a day after dropping just one game to Raducanu’s team-mate Harriet Dart.

But the teenager felt helpless as she struggled to cope with the discomfort from her blister. “It was compromising every shot I had to play,” she added. “It’s very disappointing when you’re out there playing a rubber for your country and you feel completely redundant.”

Raducanu has struggled for form ever since her shock US Open success last September, though injuries have played a major role. Blisters on her hand contributed to her second-round defeat at the Australian Open, while she also suffered a hip problem in Guadalajara and a stiff back at the Miami Open.

Those recurring niggles may by down to not being used to playing so much top-level tennis. It is only since she shot to stardom that she has been a regular player on the WTA Tour, and it seems her body has struggled to adjust to the extra strain being placed on it.

“I’ve had a few blisters on my feet before,” Raducanu continued. “I’m going to need to go and evaluate all my options. This has happened quite a few times now and we need to nip it in the bud.” To help her feet to heal in the short-term, the teenager revealed she had bathed them in “surgical spirit” after the match.

“Of course it’s frustrating but in some sort of twisted way it gives me a sense of confidence and relief that I don’t think it’s my tennis that’s the issue. As soon as I sort all of these out and keep building on my tennis level then I think I’ll be able to put out good matches back to back.”

After Raducanu’s defeat, Great Britain were given hope of pulling off an upset when Harriet Dart overcame 16-year-old Linda Fruhvirtova in the final singles match of the tie. However, the much-fancies Czechs got the job done in the doubles decider to win 3-2 overall and book a place in the Billie Jean King Cup finals later this year.

Gauff heads toward French with 1st title on clay