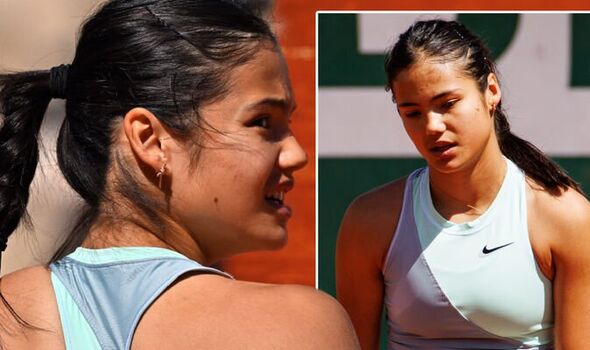 Emma Raducanu admitted she now has “a target” on her back after suffering a heavy second round defeat at the French Open. “Everyone wants to beat you and take you out,” she said.

The British No.1 today lost in three sets to world No.47 Aliaksandra Sasnovich of Belarus.

The US Open champion has failed to reach the third round in the two Grand Slams since her New York triumph – or win three matches in any tournament.

Asked how she has changed in the last year, the Bromley teenager claimed: “I think some parts of my tennis game have actually improved compared to last year. It’s different when you are someone who may have a target on their back. Everyone raises their game, wants to play well, wants to beat you, take you out. That’s something I have definitely kind of learnt on the tour this year and just accepted that. I feel like I don’t approach things like crazily differently off the court. I’m exactly the exact same person as I was 12 months ago.

“Things around me have kind of changed, but I’m the same person. Just I feel like I’ve got a lot more awareness and more experience now.”

Raducanu finished her A levels last May and return to action in a Brit Tour event in Connaught before making her full WTA debut in Nottingham.

“We were saying with my team this morning, it’s pretty much a year anniversary since my comeback to kind of competitive tennis,” she said. “I think I have come a long way since then. I think I do really welcome going around the second time. I think this year was always going to be challenging for me to adjust, find my feet. There’s always something new. Like I’m always asking where everything is. I have no idea where everything is.

“It’s going to be a lot more familiar this time around. I feel like in the last 12 months I have definitely grown a lot. On and off the court I feel like I have probably improved like how much I fight. I think that’s one of my biggest strengths and even more so on the tour this year, and it’s definitely opened my eyes to just how good everyone is and how much depth there is in the game.

“I think that it has been a pretty positive year just because I have learnt so much, and I think that the amount of learning that I have kind of done outweighs any sort of result, to be honest.”

Raducanu seemed set to gain revenge on Sasnovich for her defeat at Indian Wells last year when she played superbly to win the first set. But the big-hitting Belarusian then raised her game to win 3-6 6-1 6-1 in just over two hours – and broke Raducanu’s serve five times.

“I thought that it was a pretty long match, pretty physical, as well,” said the world No.12. “I think my opponent, she played pretty well throughout, and didn’t make any errors. But, yeah, I think that it was a long match for me, but, I mean, the whole clay season has been pretty positive overall, I would say.”