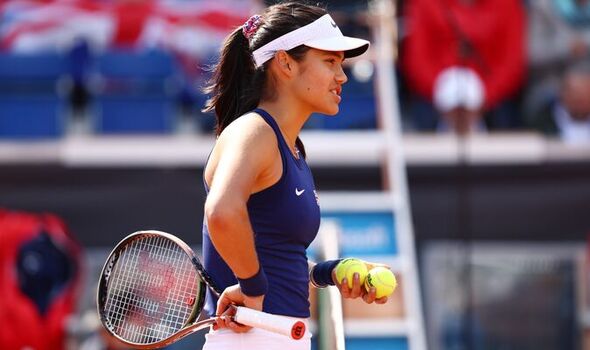 Emma Raducanu has received fresh criticism for her early losses this season as Boris Becker claimed it shouldn’t be “possible” for the US Open champion to find herself eliminated before the semi-final stage of tournaments. The world No 12 is currently playing her first full season on the pro tour and is yet to make it past the third-round in her five WTA events.

Ahead of Raducanu’s first WTA Tour-level event on the clay, Becker has slammed the teenager for failing to go deep in the tournaments she has played since becoming the first qualifier in history to win a Grand Slam title at last year’s US Open. The 19-year-old has won four of her 11 matches since winning the title in Flushing Meadows and two of her seven matches in 2022, plus one of her two Billie Jean King Cup clashes from their qualifier tie over the weekend.

“The honeymoon phase is over, and the Brits are starting to worry,” the retired former world No 1 told Eurosport podcast Das Gelbe vom Ball. “You can lose, but if you’re always eliminated in the first or second round after winning the US Open, you ask yourself. how is that possible now?”

While the seven-time Major champion accepted that it was too much to ask the Bromley teenager to win every event she played in, Becker claimed that someone of Raducanu’s ability should be roughly reaching the semi-final stages each week but her best post-US Open result has been a quarter-final in Transylvania at the end of 2021. Continuing his criticism, he said: “Emma won’t win every tournament, but you can always expect semi-finals plus or minus, but she’s miles away from that at the moment.”

Becker, who won his own maiden Grand Slam as a teenager at Wimbledon aged just 17, questioned whether the pressures were getting to Raducanu and affecting her results. “Everything is much more difficult than it looks from the outside. Especially with the psyche,” he continued.

“How do you deal with the pressure? How do you deal with your own expectations? What are you doing differently now than before?” Justifying his brutal assessment of Raducanu’s recent performances, the German also said it was “unusual that such a young, talented girl, who rose to the top of the world overnight and achieved world fame, has since only won matches that can be counted on one hand.”

Raduanu herself has hit back at those who have questioned her recent losses and attempted to tame expectations by pointing out that she was still young and inexperienced. “I’ve learnt that this year is just an absolute free swing at this point to be honest,” the world No 12 recently told the BBC ahead of her Billie Jean King Cup debut last week

“I’m just prepared to keep picking myself back up no matter how many times I get knocked down, it doesn’t matter, I’ll just come back and I’ll do it better. So yeah, I’m just trying to work it out and eventually I’ll get there. I’m only 19 still.”