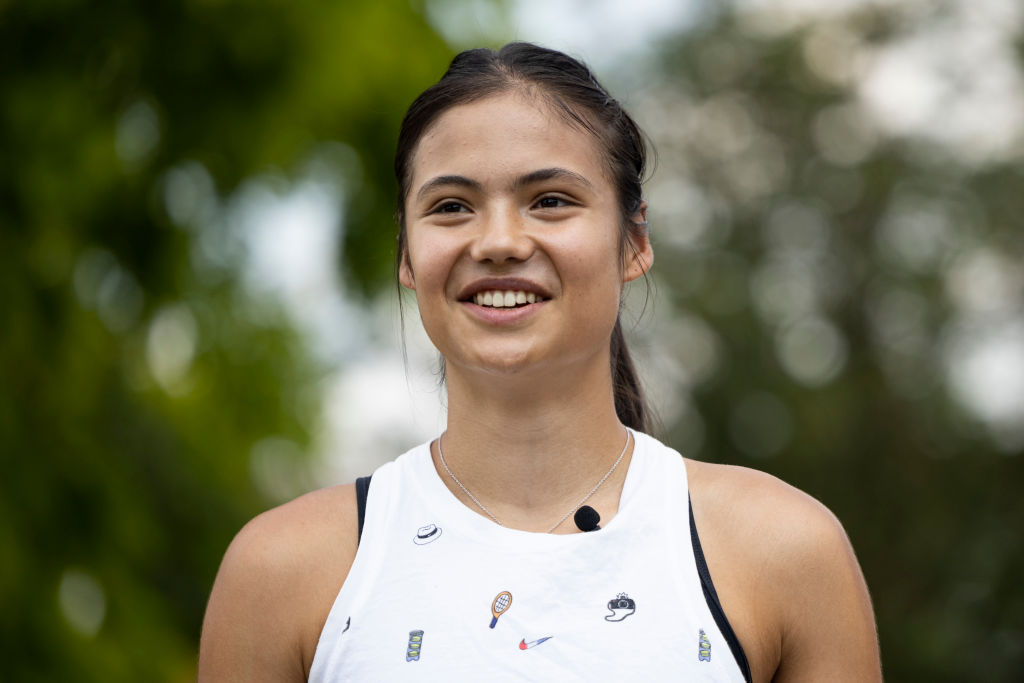 Emma Raducanu will begin her second Grand Slam adventure on Wednesday as she looks to back up a remarkable run to the fourth round of Wimbledon at the US Open.

Unlike at the All England Club, there was no main draw wildcard for the British teenager, who will instead have to graft her way through qualifying in Flushing Meadows.

Her last match at a major ultimately proved a bridge too far. She was forced to retire from her last-16 tie with Australia’s Ajla Tomljanovic with breathing difficulties.

‘I think the biggest learning was how physically behind I am because I haven’t done much work, relative to these other girls who have been on the Tour for 10 years and competing,’ Raducanu said in a Zoom call from New York on Wednesday night.

‘To be playing the intensity that I was at for a couple weeks in a row was something completely new to me.

‘But the other girls had just been doing it week in week out for the last couple years or 10 years. I think that’s definitely a big gap in my game and since then I’ve just been working on just trying to physically get stronger, be able to last more and have better endurance.

‘I put that down (her breathing issues against Tomljanovic) to just the exhaustion in the moment. We had some 20-plus shot rallies at the end of the first set. It’s not the same level lower down in the rankings.’

Since Wimbledon, Raducanu has hit the road, grinding it out in the lower rungs of the professional game.

She was beaten at a WTA event in San Jose by Chinese veteran Zhang Shuai before dropping down a level in Pennsylvania and then Chicago.

After a solid run from qualifying to the quarter-finals in the first, it was in the Chicago Challenger where Raducanu excelled.

She dumped out top seed Alison van Uytvanck en route to the final, where she was beaten in three sets by fellow 18-year-old Clara Tauson, the Dane tipped to be Caroline Wozniacki’s successor.

With that experience behind her – and her ranking hitting a career-high world No. 150 – she will now take on experienced Dutch No. 127 Bibiane Schoofs, 33, in the first round of qualifying.

‘I’ve honestly loved it,’ added Raducanu. ‘I think that this has been the longest trip I’ve ever done.

‘In total it might be like five weeks at the end so it’s definitely a new thing for me, and it’s probably gonna be my life from now on and I’m honestly just taking every week as it comes.

‘The trip has just flown by because we’ve just been focusing on the craft every single day and taking care.’

Raducanu’s profile has soared since Wimbledon – she now has more than twice as many followers on social media as British No. 1 Johanna Konta – but she insists little has changed from her perspective.

‘When you’re on the road you zone out and it’s really just about preparing for your next match so in a way I don’t feel like any difference,’ said Raducanu.

‘Obviously extremely grateful for the fans that are following me and people following me. I don’t think I’m that interesting, but it’s really nice to have that many people behind me.’

Not all remains the same from Wimbledon, however. A trial period with experienced coach Nigel Sears was brought to an end, with Raducanu teaming up with former British tour player Andrew Richardson.

‘I really respect Nigel, and me and Nigel got on great. I think very very highly of him, but I think at this stage of my development a fresh voice, and fresh eyes are sometimes good,’ she continued.

‘Nigel was extremely good especially at the top of the game and I think that’s where he probably brings the most value.

‘But I think right now for where I’m at – a nice development step is to get a few more voices in.’

Gauff heads toward French with 1st title on clay