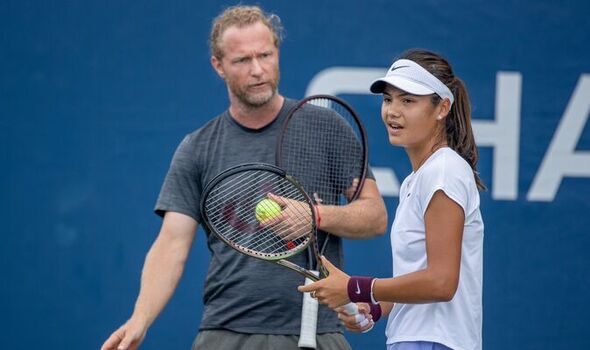 Emma Raducanu’s ex-coach already appears to have found a new player to work with just days after their partnership came to an end. Dmitry Tursunov is reportedly the one who decided to stop working with the 19-year-old, and has since been spotted with Olympic champion Belinda Bencic ahead of the Guadalajara WTA 1000.

Raducanu parted ways with her fourth coach in 15 months this week as her partnership with Tursunov officially came to an end, this time reported to be the Russian’s decision. The pair teamed up at the beginning of the North American hard-court swing and had achieved some strong results together, with the 19-year-old reaching the Korea Open semi-final and beating Serena Williams and Victoria Azarenka in Cincinnati.

But the world No 68 is no longer working with the Russian with their split announced earlier this week, as Raducanu also confirmed she would be linking up with fitness trainer Jez Green over the off-season. And it appears that Tursunov has already found a new charge in Bencic after he was spotted working with her in Mexico.

The final regular WTA tournament of the season begins next week in Guadalajara and the world No 15 is already on-site to practice with a new mentor in her corner. The tournament’s official Instagram account shared a video of Bencic training, and Tursunov was spotted with her.

The Olympic gold medallist can be seen hitting the ball while the former ATP world No 20 stands behind the baseline and watches on. It comes after Raducanu was forced to end her season early when she withdrew from this week’s Transylvania Open with a wrist injury, also ruling her out of the Guadalajara WTA 1000.

She has since been announced as part of Britain’s Billie Jean King Cup squad for next month’s Finals week in Glasgow, with team captain Anne Keothavong hoping she will be fit in time to represent her country. In the meantime, Raducanu will begin working with Jez Green to improve her fitness after retiring from four matches this season through injury.

The British fitness coach has previously worked with the likes of Andy Murray and Alexander Zverev, with the latter claiming Green helped him gain “15kg of muscle” during their time together. But the 19-year-old will also need to hunt for a new coach after her partnership with Tursunov came to an end.

It’s not the first time she has found herself in this position, as Raducanu split with Nigel Sears after he coached her during her Grand Slam debut at Wimbledon 2021, where she made the second week as a wildcard. She then axed Andrew Richardson after he coached her during her historic 2021 US Open title win as a qualifier and hired renowned WTA coach Torben Beltz a year ago, parting ways with him six months later.