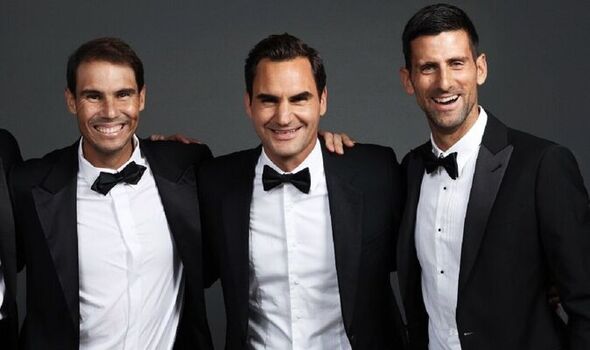 Dmitry Tursunov has brushed off the significance of the Roger Federer, Rafael Nadal and Novak Djokovic GOAT debate as he claimed that fans’ “mouths foamed” over trying to work out who would end their career as the greatest of all time. The former world No 20 refused to give his verdict on the greatest as he said all three were “spoiling” tennis fans.

The argument over who is the greatest male tennis player of all time has been ongoing ever since Federer, Nadal and Djokovic started battling between themselves to win the biggest titles in the sport, and has only intensified this year as Federer retired while Nadal and Djokovic surpassed his former Grand Slam record.

But retired pro Tursunov has brushed off the importance of the GOAT debate as he admitted he didn’t understand why it caused such a stir. “Honestly, I see these debates and I see people with their mouths foaming discussing these things, and everyone kind of brings out their own argument,” the Russian told SportsKeeda.

“I’ve never really had that super huge desire to try to figure out who’s the greatest of all time and I don’t really pay attention to that.” Giving his own thoughts on the ongoing battle between the Big Three, the former coach of Emma Raducanu admitted that they could one day be surpassed in the same way they overtook Pete Sampras’ records.

Tursunov explained: “Obviously, Roger was the first guy to have this huge domination. Pete Sampras also had this huge domination in tennis, but I think Roger just took it to another level and then Rafa caught up and followed him and surpassed him and then there is Novak, who has passed Roger and is one behind Rafa.

“Who knows, maybe someone else is going to become even bigger than all of them.” While the seven-time title winner didn’t understand the intensity of the debate, he did agree that all three men had taken things to a new level in their bid to be the best.

“I think all of them really want to put their names in the history books. That’s why I think they’re super dedicated, and they push themselves extremely hard, they’re willing to sacrifice a lot for that,” he said.

“I would imagine that it’s necessary to do that. Otherwise, I don’t think any normal person would be willing to push themselves to the limit. It takes a certain mindset and I think it’s pretty ridiculously incredible how you could have three of these people at the same time just basically each one of them would have been an incredible surpass of Sampras.

“But to have them all three play together is pretty ridiculous. I don’t know if they are spoiling the tennis fans or not but they’re certainly setting a very high bar for all the other players that are following them.”