Home » Tennis » French Open gets off to chilly start in Paris

Gone are the queues of spectators and gone is the sun as the French Open kicked off in underwhelming fashion on Sunday with persistent drizzle and a chill wind sweeping the almost-empty Roland Garros grounds.

Play started at 11am local time on court Philippe Chatrier under the new retractable roof, with Belgian David Goffin playing Italian Jannik Sinner in front of a few dozen spectators. 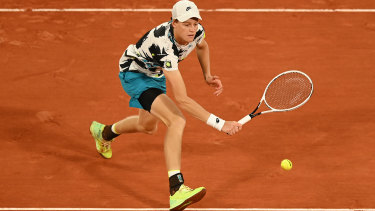 Italy’s Jannik Skinner confirmed his status as one of the most exciting talents in men’s tennis with a win over 11th seed David Goffin.Credit:Getty Images

The Italian teenager stunned the Belgian 11th seed 7-5 6-0 6-3 in his first match at Roland Garros, firing 23 winners while Goffin made 43 unforced errors.

Sinner, 19, has reached the second round of a Grand Slam only once before, at this year's Australian Open.

Matches were suspended on the other two main courts – Suzanne Lenglen and Simonne Mathieu – after 15 minutes, with former world number one Victoria Azarenka fuming about the conditions.

"It's ridiculous, it's too cold," she said as her first-round match against Montenegro's Danka Kovinic was interrupted. 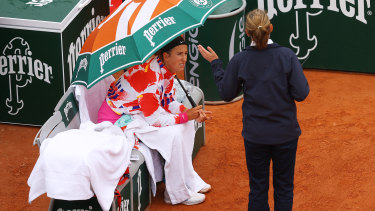 Victoria Azarenka of Belarus speaks with a match official during a rain break in her Women’s Singles first round match.Credit:Getty Images

Azarenka walked on court wearing a pink puffer jacket under grey skies with only a couple of dozen spectators brave enough to sit in the windswept stands.

She resumed playing after a 45-minute interruption, wearing tights and a wind jacket.

Azarenka was all smiles, however, after an emphatic 6-1 6-2 victory over Montenegro's Danka Kovinic in which only nine spectators witnessed the final point.

"I'm happy I managed to finish early now I can watch the others play," she said in a coutside interviewer. 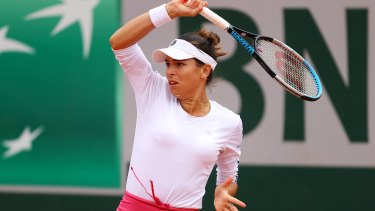 Australian Ajla Tomljanovic in action during her loss to Maria Sakkari.Credit:Getty Images

The claycourt Grand Slam was moved from its usual May-June spot to Sept. 27-Oct. 11 amid the COVID-19 crisis and only 1,000 spectators are allowed on site each day after organisers had initially hoped to welcome 20,000 – about half the normal capacity.

"I don't know what I'm doing here, it's freezing, I'm not sure I'll see a lot of play today apart from those on central court," said Yannick, a 22-year-old student who was among the few people to keep his ticket following a draw after the capacity was cut from 5,000 to 1,000 this week.

Rain is forecast at Roland Garros for the next 10 days.

The tournament is being held amid a resurgence of COVID-19 cases in France with players and guests being submitted to a mandatory coronavirus test before being sent to two hotels, which they can only leave to play at Roland Garros or practise in the neighbouring Jean Bouin stadium. 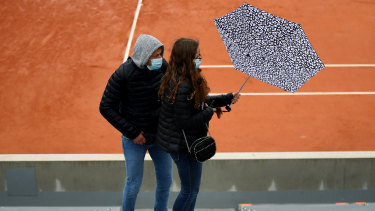 A pair of fans prepare to shelter under an umbrella as rain falls during day one of the 2020 French Open at Roland Garros.Credit:Getty Images