Novak Djokovic fended off a valiant fightback from Italy’s Matteo Berrettini to set up a mouthwatering semi-final showdown against 13-time champion Rafael Nadal at the French Open.

For the first time at this year’s Roland Garros, there were 5,000 fans in attendance for the marquee evening session, although they were forced to leave midway through the fourth set, as the match exceeded the 11pm Paris curfew.

Djokovic was 2-1 up in sets and leading 3-2 when play was briefly suspended, as some fans on Court Philippe-Chatrier expressed their discontent at the decision, jeering and chanting: ‘We’ve paid, we’ll stay”.

Berrettini was threatening an unlikely comeback having claimed the third-set tiebreaker, and Djokovic appeared in danger of being embroiled in another five-setter against an Italian opponent, after coming from two sets down to defeat 19-year-old Lorenzo Musetti in the last 16.

I’d put my house on @DjokerNole winning this match.

However, the world No 1 defied some brutal striking from Berrettini to close out a 6-3 6-2 6-7 7-5 victory in 3 hours and 32 minutes, to set up a blockbuster showdown against ‘The King of Clay’.

It promises to be a fascinating tussle, with both men chasing their own slices of history. For Nadal, a record-extending 14th French Open crown will see the Spaniard usurp Roger Federer’s tally of 20 Grand Slam titles.

Meanwhile, Djokovic is aiming to become the first player in the open era to have won all four majors on multiple occasions, and his quarter-final win ensures he becomes just the second player behind Federer to have appeared in 40 Grand Slam semi-finals.

Djokovic on course to create history Coming into the contest, Djokovic had saved 16 of his 19 break points faced at this year’s event, and that brinkmanship was on display in the opening exchanges.

Berrettini engineered break points in three separate games but was unable to breach the Djokovic defences, and the Serbian profited from his solitary break opportunity to close it out 6-3.

Berrettini had faced just four break points across the entire tournament, but his struggles on serve in set two were indicative of the unrelenting pressure exerted by the 18-time Grand Slam champion.

Djokovic continued to force errors with his remarkable defensive work and the Italian was staring down the barrel of a straight-sets exit, only to rally in a high-octane third set tie-break. The pendulum swung in a compelling breaker, but back-to-back unforced errors from Djokovic created an opening and Berrettini, who struck 23 winners in set three, gratefully capitalised to reduce the arrears.

The 25-year-old was growing in confidence and was thriving with the support of the partisan French crowd, though the temporary halt in play threatened to stifle his momentum.

Upon their return, Djokovic was wrong-footed and sustained a cut to his left hand after slipping on the red dirt, although for the second straight set he was untroubled on his own serve. 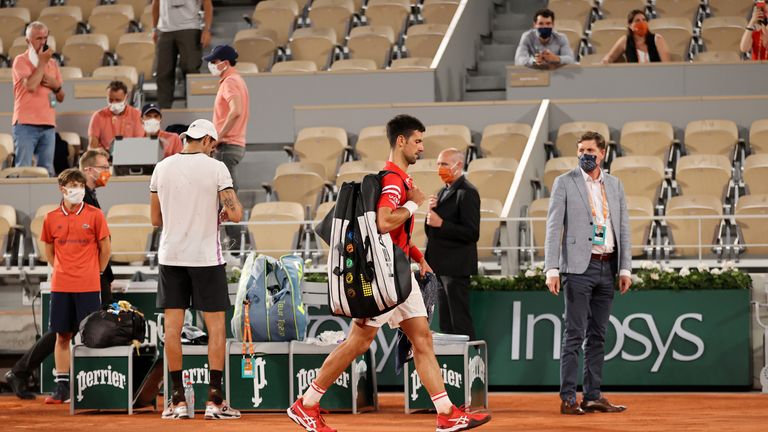 The 34-year-old had lost his last six tie-breaks against Italian opposition and with the prospect of another in the offing, Djokovic produced an exquisite game to seal his progression.

Berrettini, who performed with brutality and artistry during the latter stages, saved two match points in an engrossing game but Djokovic wasn’t to be denied.

The 2016 champion delivered two pin-point returns to wrap up victory and that sparked astonishing celebrations from the Serbian, who made up for the absence of fans with his defeaning roars.