Three-time champion Serena Williams began her bid for a record-equalling 24th Grand Slam singles title with a straight-sets victory over Irina-Camelia Begu, to prevail in the first night match staged at Roland Garros.

Williams, who lifted the French Open title in 2002, 2013 and 2015, is no stranger to making history, and she wrote yet another chapter in her illustrious career with a 7-6 6-2 victory over her spirited Romanian opponent.

There were no fans in attendance on court Phillipe Chatrier due to the 9pm curfew in Paris, but there was no shortage of drama as Williams secured her 363rd Grand Slam victory, equalling Roger Federer’s tally following the Swiss’ victory earlier in the afternoon.

The 39-year-old arrived in Paris having lost two of her three matches on clay in 2021, and she was given a major scare by Begu in a gruelling opening set.

Begu reached the fourth round at Roland Garros in 2016, and with four singles titles under her belt, she posed a greater threat than her world No 74 ranking may have indicated.

After the pair exchanged early holds, Williams was forced to fend off two break points; following up a deft forehand slice with a crunching backhand winner to retain her serve, before breaking Begu moments later.

The 30-year-old responded immediately to reduce the arrears, although Williams showcased her movement, power and precision with a stunning forehand winner to restore her cushion, before firing in back-to-back aces to move 5-2 ahead.

Begu rallied magnificently by reeling off four consecutive games to seize control of the set, but she was unable to serve it out, as a series of fine returns from the seventh seed helped her force a tie-break. The pendulum swung at regular intervals during a compelling breaker, but Williams displayed tremendous resolve to survive two set points, with a sequence of four straight points bookended by fearless forehand volleys.

The second set was a more comfortable affair for the 23-time Grand Slam singles champion, who followed up an immediate break of serve with a dominant hold, sealed courtesy of a delicious drop shot.

Begu still displayed moments of quality; a sensational running forehand winner at 3-2 down in the second set sparked applause from her decorated opponent, but it was not enough to overcome the indomitable Williams, who has now won 77 of her 78 first-round matches at Grand Slam tournaments.

The American veteran, who is bidding to match Margaret Court’s haul of 24 Grand Slam singles titles, will take on another Romanian for a place in round three, as she locks horns with world No 174 Mihaela Buzarnescu.

“It wasn’t easy in that first set. I was up and I felt like I had some opportunities and she played really well,” Williams reflected in her post-match interview.

🇺🇸@serenawilliams is through to the 2R on the eve of the first ever🌙night session at #RolandGarros pic.twitter.com/YZCSk6Yxv8

“She [Begu] is a really good player, she has so many good wins, so I’m happy I was able to pull that first set and eventually the match.” 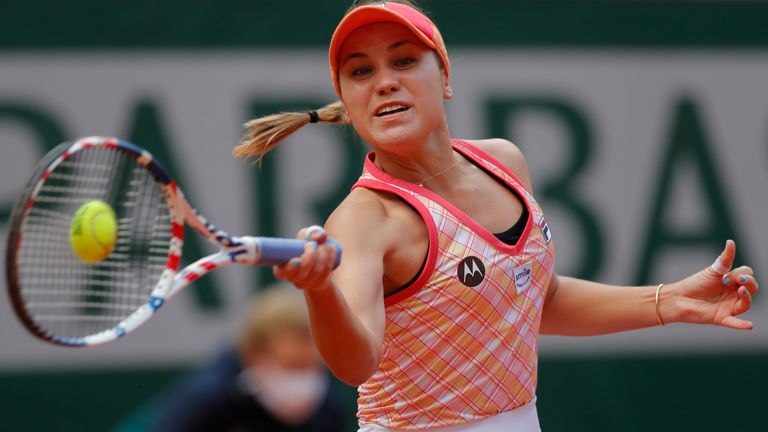 Kenin converted nine of her 10 break points across the contest, to set up a second-round showdown against her fellow American Hailey Baptiste.

Elsewhere, two-time Grand Slam champion Garbine Muguruza crashed out in the opening round, losing out 6-1 6-4 to Ukraine’s Marta Kostyuk.

The 18-year-old produced a terrific display to account for 2016 winner Muguruza, sealing her first career top-20 win in the process.