Home » Tennis » From the Archives, 1961: Australians dominate at Wimbledon

LONDON. Australia took two titles on the last day of Wimbledon yesterday – the men’s doubles, won by Neale Fraser and Roy Emerson, and the mixed doubles which went to Lesley Turner and Fred Stolle. 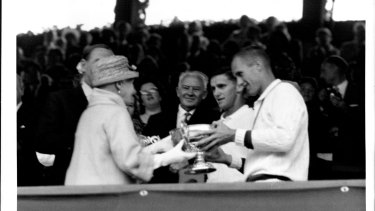 The Countess of Athlone presents the trophy to Roy Emerson and Neale Fraser, after their win in the men’s doubles at Wimbledon.Credit:Associated Press

This made Australia’s tally three following Rod Laver’s win over “Chuck” McKinley in the final of the men’s singles on Friday.

The all-British women’s singles title yesterday was won by the quiet, restrained Angela Mortimer, 29, from the big-hitting Christine Truman, 20.

In the all-Australian men’s doubles final Fraser and Emerson triumphed over Bob Hewitt and Fred Stolle 6-4, 6-8, 6-4, 6-8, 8-6, after nearly three hours of thrilling tennis.

Australia once more lost the women’s doubles. It is the only title Australia has never won at Wimbledon.

Margaret Smith, practically crippled with pains in the back, played against doctor’s orders in the final, and though she battled bravely was just not good enough.

It was a constant clash of exciting rallies, with brilliant crosscourt shots, almost unbelievable returns and superb volleying.

As the result showed, the two pairs were evenly matched. Hewitt and Fraser supplied the power – while Emerson and Stolle were the steady players placing their shots to perfection.

If anything, Hewitt and Stolle generally had a slight edge, but they made the mistake of becoming careless in the third set.

Even so, they came very close to winning it.