Tennis Australia has handed out the first wildcards ahead of next year's Australian Open, with Daria Gavrilova and Marc Polmans among the recipients.

Gavrilova, who missed the 2020 Australian Open due to injury, and Polmans were joined by Christopher O'Connell, Astra Sharma, Maddison Inglis and Lizette Cabrera as local talents handed wildcards for the 2021 event. 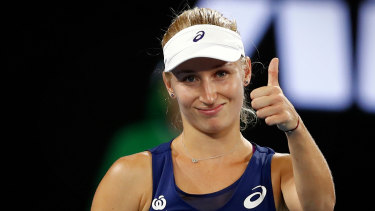 “I’m really excited to play in the AO next year. I’ve been training really hard to prepare and I’m just super excited to get the opportunity to compete, especially in front of a crowd, we haven’t had that for a while,” Gavrilova said.

“I was thinking the other day that Victorians have had such a rough year with the pandemic, so I’m hoping that the AO is a good chance for people to come out and watch, and be excited that tennis is back. I’m going to make sure I bring double the energy, so I hope the crowd will, too."

Gavrilova is currently ranked No.445 in the world, her highest ranking coming in 2017 at No.20.

Meanwhile Polmans will get the chance to better his second round result in the 2020 Australian Open. He also made the second round at the French Open.

The world No.124 will be joined by the world No.120 O’Connell for his third Australian Open. He won his first grand slam match at the US Open this year.

“I was super pumped to get the call. I was lucky enough to receive a wildcard last year and it was an amazing experience,” O’Connell said.

“I’m extremely excited to play in another Australian Open and compete against some of the best players in the world.”

Sharma, Inglis and Cabrera will contest their third, second and fourth Australian Opens respectively in 2021 courtesy of the wildcards.

There are six men’s and four women’s wildcards remaining for Tennis Australia to give before the tournament.

“While 2020 has been an incredibly challenging year, we’re proud of the strength and resilience this group of players has shown during this difficult time,” Australian Open tournament director Craig Tiley said.

“Chris, Marc, Dasha, Astra, Maddy and Lizette have all inspired us with their efforts both on and off the court, here at home and in unprecedented conditions overseas. We are excited to give them the opportunity to compete at Australian Open 2021."

The Australian Open will begin on February 8 in 2021 because of delays caused by the pandemic.