Home » Tennis » Get the jab or skip a slam: does professional tennis have a vaccination problem?

Less than a year after tennis officials engaged in painstaking wrangling with players to accept quarantine conditions just to get the Australian Open off the ground, the sport faces another battle: convincing unvaccinated players to get the jab.

After confirmation that Australia is mandating double vaccination as a condition of entry, the nation’s annual tennis-fest at Melbourne Park in January represents a sudden reality for professional tennis players: get vaccinated for COVID-19, or don’t come. Suddenly, it’s suck it up or skip a slam. 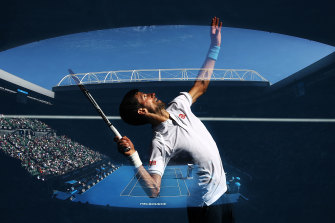 Double exposure: Novak Djokovic says getting the vaccine should be up to the individual.Credit:Getty

Vaccination rates among the tennis elite are sluggish. On current estimates about one-third of players in the Association of Tennis Professionals (ATP) and Women’s Tennis Association (WTA) are yet to be inoculated, leaving the lingering question: are tennis players especially vaccine hesitant and, if not, what other factors are at play?

Significantly for Australian Open organisers striving for the most attractive event possible, vaccine hesitancy seems to afflict the men’s and women’s upper echelon. Novak Djokovic won’t reveal his status, labelling queries as “inappropriate”, while world No.3 Stefanos Tsitsipas, having voiced concerns about vaccines, first said he would not discuss his medical status before soon committing to the tournament.

“I will play under the conditions that have been set now. I think it’s fair,” said the Greek. Dominic Thiem, the world No.8 from Austria, indicated he is waiting for the Novavax vaccine to be approved.

US Open champion Daniil Medvedev has backed Djokovic’s stance that medical records are not for public consumption.

“I liked what Novak said about this,” said world No.2 Medvedev, as reported by Eurosport. “He said the vaccination was a personal matter and he would not be making it public, and I also decided not to disclose medical things.

“Of course, the players can say that they are injured, but this will be a play on words … I will not say whether I am vaccinated or not. But I want to play in Australia.”

While world No.1 Djokovic and his place in tennis history dominates the headlines (he’s tied on 20 majors with Roger Federer and Rafael Nadal), issues around mandating medical treatment and disclosure of personal medical information are a concern for athletes of all shapes and sizes, across myriad codes.

With the timing of Australia’s exit from lockdown – only a few months before the Open begins – and the sheer number of international arrivals involved in putting it on: tennis, like it or not, has become a battleground in the vaccination debate.

The message from the two peak tennis bodies has been consistent: they are playing an active role in encouraging and facilitating vaccine take-up among their members. In the WTA’s case, it said it has a goal of “in excess of 85 per cent by the end of the year”.

“The majority of young healthy people haven’t worried too much about vaccination until – in Australia anyway – it became clear that … you can’t go to a pub.”

Yet there is a distinct prospect of some high-profile players holding out on vaccination and choosing to boycott the Australian Open, or simply sitting this one out. That means the undisputed king of Melbourne Park, Djokovic, could miss his chance to edge past Federer and Nadal on his cherished Melbourne court, the scene of nine previous triumphs.

In an interview with local Serbian media, an aggrieved Djokovic kept the ball in court, casting significant doubt on coming to Australia. The 34-year-old described vaccination as “a private matter and an inappropriate inquiry”.

The very nature of professional tennis, however – heavily geared towards individual performances over team environments, as well as having events spread across the calendar – arguably works against the vaccination equation: it’s hard for athletes to find a window for two doses without negatively affecting their performance or affecting their training.

The sport’s so-called fifth major, Indian Wells, only just finished after a one-off spot on the calendar in October while events still to come this year include the ATP Finals for the men’s elite, the equivalent WTA Finals (last won by Ashleigh Barty in 2019 and this year held in Mexico) and the expanded Davis Cup and Billie Jean King Cup (formerly the Fed Cup) finals, both looking to gather momentum after the pandemic.

Experienced tour administrator Peter Johnston is convinced vaccination rates will soon increase, and player “convenience” is the main factor that has driven the current predicament.

“Have they got the time to be in the same location to be double-vaxxed?” Johnston said. “The off-season is short, especially with Davis Cup and the Billie Jean King Cup. There are logistical issues.”

“There could be some players going ‘I’ll get it done as soon as the off-season’s on’. I would expect the take-up [to increase] and even with the flagging of the situation and the press that Australia’s been getting, it’s got to ramp it up.

“I would think those factors would have to lead to a surge, regardless of what the tours mandate [about vaccination in the future].”

“They’re probably like many people – they’ve been putting it off until they have to, as many young people have. They are young, healthy people. The majority of young healthy people haven’t worried too much about vaccination until – in Australia anyway – the last month when it became clear that unless you’re vaccinated, you can’t go to a pub.

“I’m not too worried about the low rate of vaccination on the tour.”

Australian player Ellen Perez, who reached her third singles major main draw at Wimbledon this year, confirmed the WTA had advised players on vaccination and provided “many opportunities” to get the jab.

“Before [the] slams we have had health professionals update us on the statistics and benefits … and the WTA has been big advocates for seeing everyone get vaccinated,” Perez said.

“There’s never been talk until very recently about making it mandatory. They have reached out to the players to ask our thoughts through a survey, but they also know [the] Australian Open may make it required to participate, so that might force players to.

“Either way the WTA is very much heading down the path of making life extremely difficult for those not vaccinated.

“[Personally I’m] not sure they will ever make it mandatory, but I think if they provide enough benefits to those vaccinated and enough disadvantages they will achieve what they wanted.”