Home » Tennis » ‘If we had one of the men who was No.1, just imagine’: Tennis great’s Barty call

Former Australian women’s star Judy Dalton, one of the instrumental players who drove equality in tennis half a century ago, believes world No.1 Ashleigh Barty would be getting greater recognition if she was a man.

A Wimbledon finalist and doubles champion at all four majors, Dalton was a member of the sport’s “Original Nine” – the group of professional players who rebelled over equality issues, mainly around prize money, and helped form the Women’s Tennis Association in the 1970s. 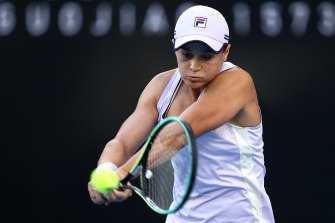 Next up for Barty is countrywoman and sometime Billie Jean Cup (formerly the Fed Cup) teammate Daria Gavrilova.

“But we are probably … completely different personalities. Like complete opposite,” said Gavrilova, who was eye-catching in beating Spain’s Sara Sorribes Tormo on Tuesday night.

“But we get along on tour, and, yeah, she’s someone I definitely look up to. 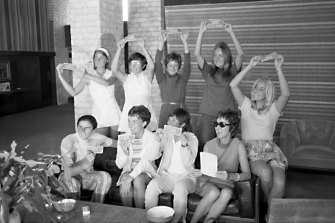 “I’m pretty proud that we’ve got someone like Ash, and, you know, playing Fed Cup with her, Billie Jean King Cup now, is always fun and she just represents us … so well.

“Her tennis smarts are incredible. Before a tie we always play team analysis, like the opposition analysis, and she’s always spot on. She’s just spot on every time.”

Dalton, too, is an unabashed Barty fan and agreed that Barty was primed for an assault on the title in Melbourne with the challenge for her to keep the No.1 ranking this year a stiffer one.

Barty missed the chance to defend her French Open title last year – as well as choosing to skip the US Open – due to her concerns surrounding travel during the coronavirus pandemic.

“I admire because I think she took the right stand of saying that she didn’t want to play the US or the French, and that must have been very difficult for her not to play the French because when you’ve won the tournament you would always want to be the defending champion.

“But I think she did the right thing. If I was in her position I would have done exactly the same.”

Barty won four matches en route to last week’s title, a WTA 500 event, getting a passage straight to the final after Serena Williams withdrew from their semi.

It’s the second straight year that Barty has entered the Australian Open as the top player in the game.

“I think this is an opportunity for her to be able to win it, having got to the semis and lost last year, I think she’s learnt so much,” said Dalton.

Dalton, fellow Australian Kerry Melville Reid and American legend Billie Jean King were three of the members of the “Original Nine” – the breakaway group that chose to form their own tour in 1970 that morphed into the WTA. 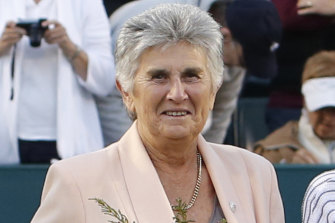 “It’s a long story of how we got to form it,” said Dalton, finalist at Wimbledon and Australian semi-finalist in 1968.

“We didn’t realise I don’t think how important it was. We didn’t start out to have equal prizemoney, we probably talked about it but it was a fantasy thing. It wasn’t something that we ever thought would happen.

“But the main thing was that we wanted to have recognition of the women because in those days … when we went to tournaments, I know this sounds ridiculous but we would have been in New York and Billie Jean [King] could have gone into a lift and people wouldn’t have had a clue who she was.”

Dalton and Reid are the faces of a commemorative coin that is being tossed at this year’s Australian Open in recognition of their pivotal roles in the evolution of women’s tennis.

“I have fond memories from the many Australian Open tournaments. I am moved to be featured on the ANZ Commemorative Coin and be an advocate alongside Judy for the many amazing women in tennis,” said Reid, Australian Open champion in January 1977.