Home » Tennis » ‘It came back to bite me’: With golden slam on offer, Alcott changes approach

Dylan Alcott has backed away from his obsessive approach to chasing rare bragging rights on offer in 2021 – a “golden grand slam” – as the wheelchair tennis champion made an impassioned plea to Australians back home: get vaccinated, if you can.

Having been on the road for several weeks, in and out of different tennis “bubbles”, Alcott has the second leg of the slam, the Roland-Garros title, in his safekeeping and is preparing for a hectic period where the Tokyo Paralympics come not long after Wimbledon, where he is the defending champion. 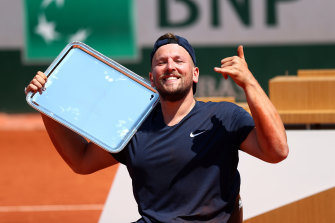 Shortly afterwards, it’s the US Open in New York with the prospect of a fourth major for 2021 up for grabs, hopefully with a Paralympics wheelchair quad singles gold medal in his pocket.

But the 30-year-old veteran said he’s now judging his wins and losses in a different light.

“I had a chance to win the calendar slam in 2019 and I got a bit ahead of myself and thought about it too much, and it came back to bite me,” Alcott said from the All-England Club, where he will begin his Wimbledon campaign on Thursday night (AEST).

“The best version of me is the guy that’s having fun, enjoying himself, being grateful for the opportunity. I am very grateful to be here at Wimbledon.

“I’m not even thinking [too much] about Tokyo to be honest.”

In both 2019 and 2020 Alcott lost the US Open final. Wimbledon was cancelled due to the pandemic last year but his defeat to Andy Lapthorne in New York two years ago, a humbling 6-1, 6-0 result, stopped him from securing a grand slam.

It’s the first time a “golden slam” has been available to wheelchair tennis stars. That lure wasn’t there when Alcott won singles and doubles gold in Rio de Janeiro five years ago, when the Paralympics clashed with the US Open. That’s not the case this year.

With world No.1 Novak Djokovic also eyeing off the elusive “golden ticket” – achieved by Steffi Graf in 1988 – Alcott could soon enough be in rare company.

“[But] you know what, my worth, my self-worth, my worth to my community, my worth to my country is not dependent on me winning the golden slam. I used to think it was and then I would fail and [think] ‘I’m not worth it, I’ve let everyone down’.

“I’d be lying to say if I won it, I wouldn’t be having a thousand beers. I’d be the happiest guy in the world. So I’m going to try and do it. All I can do is try my best.”

Alcott will be among the Australian athletes for whom vaccination is compulsory at the Toyko Paralympics, starting in late August.

But getting the jab or not was never a question for him.

“The reason I got vaccinated and put it up [on social media] is that I come from a vulnerable community,” Alcott said.

“I have a consulting company where we hire 35 people with disabilities. They’re all consultants, they’ve all got different disabilities, and a couple of them weren’t able to leave the house for 14 months because if they got COVID, they would die.

“I put up a funny post saying ‘I can now walk’. I said ‘I’ve got the vaccine and I’m now cured from paraplegia, and a lot of people were like ‘I think he’s lying, I don’t believe him. He’s making it up’.

The wheelchair tennis and wheelchair basketball gold medallist (Beijing 2008) said he was not aware of vaccine hesitancy among fellow Paralympians.

“The [compulsory] stance has been pretty much widely [accepted]. I don’t know anybody who hasn’t had it,” Alcott said.

“Once we can sort out the vaccines in Australia, I think a lot of people will take it too, once there’s more supply.

“For anybody at home who doesn’t want to do it, the UK is open – festivals, pubs, travel, full crowds. It’s amazing to see. So I think we want to follow in their footsteps.”

Ash Barty’s semi-final and every match of the Wimbledon finals is available to stream live and ad-free on Stan Sport with select games on 9GEM.