Home » Tennis » I’ve got my little brother back. Now the world will get Nick Kyrgios the Wimbledon champion 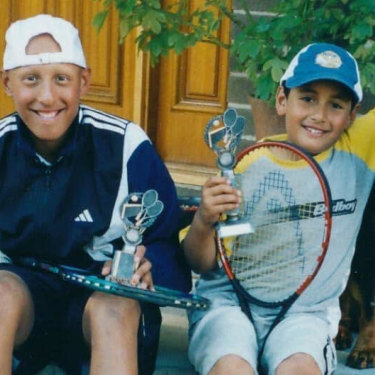 Christos and Nick Kyrgios outside their family home in Canberra as kids.

Christos Kyrgios has penned an emotional tribute to his brother, Nick, on the eve of his maiden grand slam final, breaking down into tears as he revealed why the pair were recently estranged.

For a big chunk of the last six or seven years, I lost my little brother. That kid I grew up with, who was so carefree and engaging, was almost gone.

The world changed him. Tennis changed him. He became distracted; always worried about something. Even when you were with him, he wasn’t present in the moment. 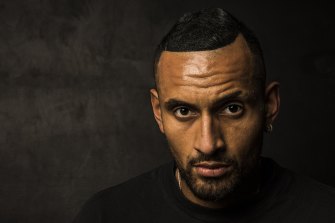 Nick Kyrgios went through a dark time before turning his life around.Credit:Steven Siewert

He was a prisoner in his own body, going through the motions without any sense of happiness in the life he’d worked so hard to make for himself.

I’d come over to visit Mum and Dad’s and Nick wouldn’t get out of bed before midday. And when he did, he was straight out the door. In four or five days, I’d see him for an hour.

People wouldn’t know this but Nick and I stopped talking for quite a while. He was so unhappy in himself that he shut out the people that had his best interests at heart.

I’m far from perfect, but as a big brother, it killed me seeing him go through the pain he was suffering. Mum was worried sick about him. We all were.

“I missed my brother. I didn’t know this other person that he had become.”

I tried to offer my guidance, and it usually came from lessons that I had learned in making mistakes in my life.

When he was going out until all hours of the morning, trying to drink his way out of his depression, I overstepped the mark. 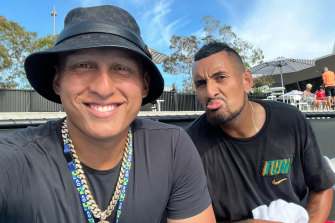 Christos and Nick Kyrgios after practice.

If people think Nick is fiery, I’m probably not a good person for them to see when I get worked up. But I believe when something means so much to you, which my little brother does, you fight for it.

I crossed the line. Although, in my heart I know it was coming from a good place.

I missed my brother. I didn’t know this other person that he had become. I wanted him to be happy. However, the people around him and the habits he was developing were not conducive to a happy life.

Anyone who knows Nick will tell you that he needs to make the mistake for him to learn. He needs to touch the hot stove, even though Mum and Dad are telling him not to, for him to understand why someone would tell him to do something in the first place. 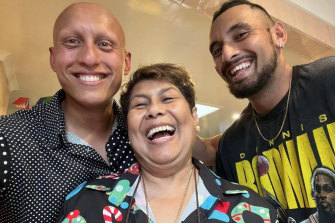 The Kyrgios brothers with their mother, Nill.

It wasn’t until he was able to work out what he was after in his heart that he could then relate to what everyone around him was actually trying to do.

I don’t care about how many tournaments he wins. Sure, it’s great to have on-court success, but what I wanted more was to have my little brother back.

I wanted him to progress through life and find people to share positive moments with. Find people he could trust. Things that encompass all-round happiness, not just happiness on a tennis court.

There was a time when the values that Nick held closest to him were family and spending time together. These important things that my mum and dad bestowed upon us as the main building blocks of your life, he forgot them for a while.

But since he met his girlfriend Costeen, she’s helped open his eyes again. She’s cut from that same cloth where family is the most important thing. 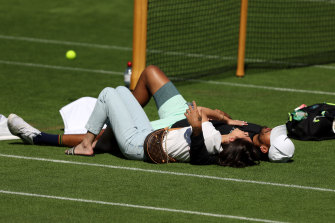 Nick Kyrgios and his girlfriend Costeen Hatzi lay together on the practice courts of Wimbledon.Credit:Getty

There was a lot of chaos in Nick’s life before he met her. The way he wanted his life to be was not the way things were unfolding.

He was caught between trying to be someone everyone said he was and being the person he wanted to be.

“He was still a kid … He wasn’t ready for how life was going to change.”

Nick’s a character. He is jovial. He is going to talk some crap. That’s his personality. But it was so hard for him to get away from an image or caricature that was created for him from the media from a young age and then echoed on a daily basis to him through all these social media avenues. He couldn’t get away from it.

He was still a kid. He didn’t know how to deal with that. He was 19 when he beat Rafa at Wimbledon. He wasn’t ready for how life was going to change. He had all these people telling him, ‘this is you, this is who you are’.

It was very easy for him to succumb to the person that everyone was trying to tell him that he was. And he did. 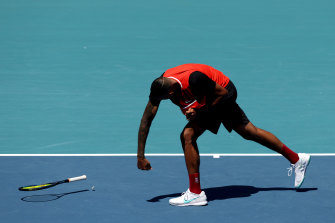 Nick Kyrgios throws his racquet during his loss to Jannik Sinner in Miami earlier this year.Credit:Getty Images

People are still criticising him and he’s in the final at Wimbledon. He’s in a grand slam final and people like Pat Cash and Mark Philippoussis still want to put shit on him.

For some, they will see Nick reaching the last day of Wimbledon as him finally fulfilling his potential.

For the family, the fulfilment occurred months ago.

On Sunday night, I believe the rest of the world will get Nick Kyrgios the Wimbledon champion. For us, we’ve already got our baby brother back. Mum and Dad have got their son back.

When Nick comes home to meet his nephew, my son George, for the first time he will be a champion in his eyes. He is already a champion in all our eyes.

Seeing the transformation that he’s gone through, and having the birth of my son as well, it’s been the best two weeks of my life. 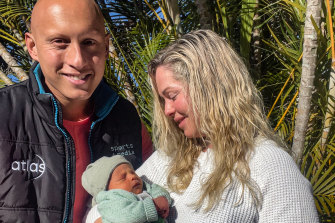 I love the guy so much. Seeing him mature and evolve back into the happy fulfilled version of himself is all that I could have asked for in a brother.

I just want to see him winning in all aspects of life. I sent him a text after Rafael Nadal pulled out with injury to guarantee him a spot in the final.

I told him what an incredible achievement it was to be still alive so far into the tournament. His response was just two words. “One more”.

Watch all the action from Wimbledon ad-free, live & on demand on Stan Sport, with Centre Court matches streaming in 4K UHD.