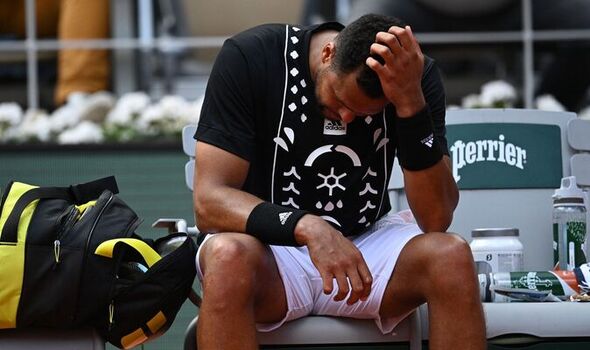 Jo-Wilfried Tsonga was left close to tears as his back injury came back to haunt him in what was the final match of his career. The former world No 5 is retiring at the French Open and was serving for the fourth set against eighth seed Casper Ruud when he appeared unable to serve and was forced to call the trainer ahead of the fourth set tiebreak. He tried to finish his last ever match but was forced to bring down the curtain on a glittering 18-year career in sad fashion as his opponent won 6-7(8) 7-6(4) 6-2 7-6(0).

Tsonga was already emotional when stepping up to serve to stay in the match at 4-5 down in the fourth set, and received a time violation at 40-40 as he had to fight back tears in what was potentially the last game of his career. But the Frenchman kept his career alive as he won the next six points to hold and break for a 6-5 lead.

But it all went wrong for the former Australian Open finalist as he stepped up to serve for the set and was physically hampered, struggling to serve as his back injury came back at the worst possible moment. The 37-year-old was close to tears as he was broken for 6-6 and needed to call the trainer for treatment just to get through the tiebreak.

He was unable to win a point in the breaker, as Ruud closed out a 6-7(6) 7-6(4) 6-2 7-6(0) victory, sealing the end of Tsonga’s remarkable career. The former world No 5 won 18 titles throughout his 18 years on the pro tour, as well as a Grand Slam final in Australia back in 2008, and two semi-finals each at the French Open and Wimbledon, and three quarters at the US Open.

JUST IN: Wimbledon boycott rolls on as Shapovalov admits pressure of points ban

As Tsonga was left almost forced to retire injured in the final match of his career, ex-British No 1 Laura Robson tweeted: “Gutted for Tsonga right now but what a match and effort to go out on, one of my all time faves to watch.”

And former world No 5 Jo Durie wrote: “Oh no Tsonga has hurt his shoulder just when he had broken serve in the 4th. So frustrating for him. Such a fantastic performance. Superb atmosphere.”