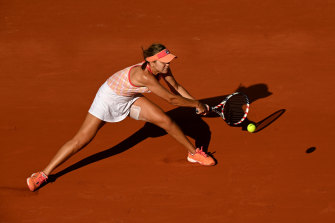 Australian Open champion Kenin was kept on her toes for two sets before sealing the match in an easy decider to set up a clash with Czech seventh seed Petra Kvitova.

Collins was bothered by abdominal pains in the third set, and appeared unable to give her maximum effort in the finale on court Philippe Chatrier.

"This is really special, I'm super happy. I know she plays really aggressive so I needed to have a better first serve percentage and play aggressive myself; I did a great job overall," said Kenin, who has won four of her five matches at Roland Garros in three sets.

"I guess I like winning in three sets. I know it's tough but I'm getting the job done." 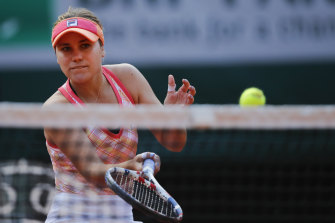 After a solid start on both sides, Collins served a woeful double fault to hand Kenin the first break of the match, and a 3-2 lead.

She held serve and set up another break point at 4-2, but Collins saved it to stay in contention.

Kenin was, however, solid on her service games and she bagged the opening set when her opponent's return sailed wide.

It was the first time Kenin had taken a set from Collins in four encounters, and the fourth seed kept her momentum, breaking again for 3-2 in the second set as her unseeded opponent smacked a forehand long.

But this time, Collins hit back to level for 3-3 and she started to threaten Kenin's serve, eventually breaking again to level.

The comeback was short-lived, though, as Collins quickly fell 4-0 behind in the decider before taking a medical timeout, holding her midriff as she went off the court for treatment.

"I felt like I was kind of a little bit off with my shots. Sometimes just going for it and just wasn't working for me today," said Collins, who suffered from an abdominal injury earlier this year.

"She played well. Obviously there is a physical ailment, but I don't want that to take away from the great tennis that she was playing."

The second quarter-final of the day was marred by minor controversy, with Siegemund receiving a time violation warning for slow service on a crucial point against two-time Wimbledon champion Kvitova.

To hasten the pace of play, the chair umpire currently starts a 25-second clock following the completion of a point.

Siegemund stretched her back couple of times while saving three break points from 0-40 down in the fifth game of the second set when chair umpire Marijana Veljovic served her a time violation during her service motion. 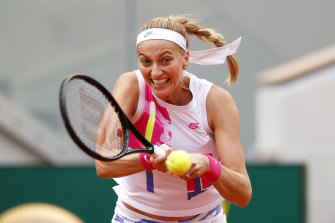 The world No.66 argued with Veljovic before her service was broken. Siegemund eventually went on to lose the match 6-3, 6-3.

The German said she was known for being generally slow with her serve but some umpires are lenient on the point they start the serve clock.

"As far as I know, the rule is before the clock goes to zero I have to start my movement. She is very sharp every time I have her on the chair. She gives me a violation the first opportunity she gets," Siegemund told reporters.

"So it makes a big difference when they press the button when the clock is running and I think that is where the rule is very unprecise.

"When the clock is zero and I'm starting my movement, then give me a break. If every time I need 40 seconds, that's a different thing. But this was just exaggerated."

While Siegemund was not too bothered about it, she felt the warning was like an elbow jab and called it "a joke".

"I'm trying my best to be faster. And I think I am also much faster than I was in the past," she said.

"Be a little more gentle in the way you interpret the rules. But if she want to give me a time violation, that's OK."