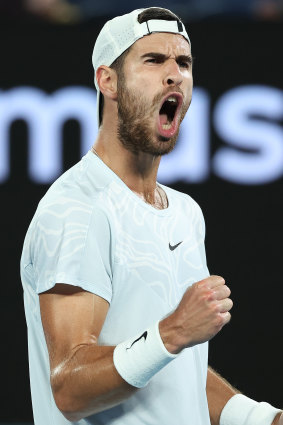 Karen Khachanov played the role of spoiler to Nick Kyrgios’ US Open bid superbly last September, but said the effort required to oust the Aussie “killed him”.

The Russian, who plays Stefanos Tsitsipas on Friday night for a spot in a maiden grand slam final, feels in vastly better shape when compared to his last run to the final four in New York in 2022.

In stark contrast to the US Open, where he was exhausted by the semi-final stage, the now 26-year-old has dodged the late-night dramas that have sparked debate about scheduling in Melbourne.

His story will be a familiar to those who watched Andy Murray struggle to move in his clash against Roberto Bautista Agut last Saturday after his epic against Thanasi Kokkinakis.

“The quarter-finals with Nick killed me because we finished around 1.30am,” Khachanov said.

“That day, I remember, I went to sleep about 5am after all of my treatments and everything.

“You try to recover, but I think once you miss the full night of sleep, it’s crucial for the energy, because food and sleep is one of the most [vital] recovery treatments, I would say.”

A silver medallist at the Tokyo Olympics, Khachanov’s biggest success so far came in a final over nine-time Australian Open champion Novak Djokovic at the Paris Masters in 2018.

At that stage he was considered the leader of the pack of three Russian boyhood friends who were considered capable of becoming regular grand slam contenders.

Khachanov, former US Open champion Daniil Medvedev and Andrey Rublev, who was routed by Djokovic in a quarter-final on Wednesday, have lived up to this billing to an extent.

But the sustained excellence of legends Djokovic, Rafael Nadal and the now-retired Roger Federer have stymied their efforts to dominate the top end of the sport.

Khachanov, who blunted the effectiveness of Kyrgios’ serve with his range and clever positioning on return, is surging back towards the top 10 after a lull he said was due to “personal reasons”.

“Not everything was going as smoothly, but, you know, look, I always believed in myself and my abilities, and what I need to do in order to be at my best,” he said.

“I think with my team, we are on the right direction and the right move. I think this kind of competition, in a positive way between [Medvedev and Rublev] helps us to get better.” 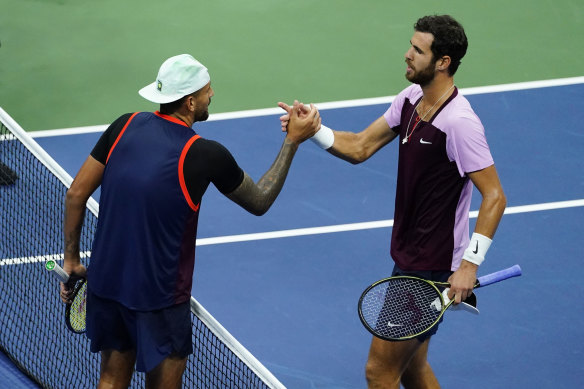 Should Khachanov manage to upset Tsitsipas, he will move above Medvedev in the rankings and return to the top 10.

That is a challenge, for the Greek favourite has won all of their five outings to date.

Khachanov, who has Armenian heritage, was criticised by the Azerbaijan Tennis Federation this week for his support of the Republic of Artsakh following his Australian Open wins this week.

Political stances aside, he is focused on producing his best against Tsitsipas after disappointing against Casper Ruud in the semi-final in New York four months ago.

“This time is different because I think I’m physically … feeling really good so far, and I didn’t have such long matches yet,” he said.