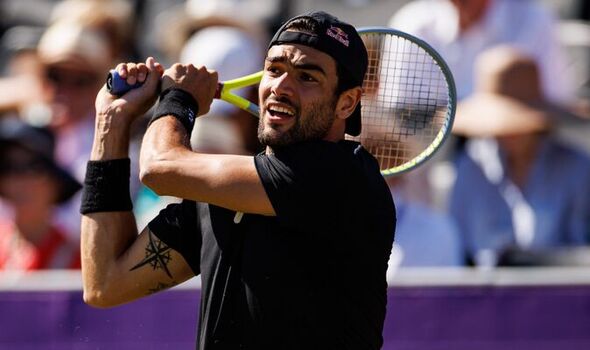 Matteo Berrettini has adjusted his outlook after working out he would lose ranking points even if he defended his title at Queen’s this week. The Italian is one of the players who will be hit hardest by the ATP’s decision to remove points on offer at Wimbledon and is aiming for new goals after digesting the news.

Berrettini blasted the ATP on Monday in what was his first opportunity to speak on the tour’s decision to strip all ranking points from Wimbledon, meaning his ranking will take a hit when his 1,200 runner-up points from last year are removed. A day after saying the move was unfair and claiming the ATP failed to consult players, he has now adjusted his goals and reacted to the prospect of losing points at Queen’s this week.

The 26-year-old won the cinch Championships last year and opened his title defence with a straight-sets win over Dan Evans on Tuesday. As the reigning champion, he will be unable to gain any points on his ranking ahead of the big blow to his standing after Wimbledon and worked out that, even with a title win this week, he would still lose points with some from the 2019 Covid best-of ranking remaining on his tally.

JUST IN: Peniston opens up on overcoming cancer to make it to Wimbledon

The world No 10 previously admitted it was “difficult” to compete knowing in the back of his mind he would drop out of the world’s top 10 and potentially fall even further but downplayed the extra pressure it brought him at Queen’s. “Pressure is always there, you’ll always find it in a way if you want to. It always is tough,” he admitted.

But the six-time title winner said he was now focusing on building his standing in the race to the ATP Finals, with the tournament now held in his home country. The eight players who earn the most ranking points in the calendar year qualify for the year-end tournament and Berrettini currently sits in 17th place following a three-month layoff for a right hand surgery.

“So that’s the goal here, I mean having a good run, playing the level of tennis I have today and thinking ahead.”