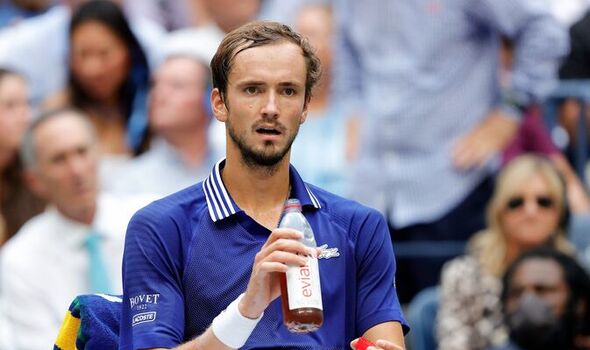 Daniil Medvedev was told to “f*** off” by Vienna Open final opponent Denis Shapovalov on his way to winning his second ATP Tour title of 2022. After the Canadian took the first set, it was Medvedev who came storming back, winning 4-6 6-3 6-2 as he warmed up for the season ending Paris Masters and ATP Finals tournaments in perfect fashion.

After his win, he warned his leading rivals that he was confident of performing well in both events, amid an eventful few weeks for the former world No 1. Prior to his win in Austria, he became a father for the first time after his long-term spouse Daria Medvedeva gave birth to their daughter.

Before the final in Vienna he’d captured just one title in 2022, beating Britain’s Cam Norrie to claim the Los Cabos Open in Mexico. But the Russian now appears back to the sort of form that saw him capture his sole Grand Slam title, the US Open, 13 months ago.

And Shapovalov was left frustrated by his rival’s defensive play, with one particular scrambled return prompting a foul-mouthed outburst from the eventual runner-up. He shouted “f*** off” during the break after Medvedev’s moment of magic, although the comment appeared to represent his disbelief, as opposed to a term of abuse.

The incident was posted on reddit with the caption: “Shapovalov offers his opinion on Medvedev’s defensive wall.” It led to @hannalisk praising the defiance of Medvedev, writing: “That’s why I love watching him. He’s like the opposite of Federer. Fed made everything look easier than it is, Medvedev manages to make it look harder and yet still gets results.”

@balconycanadian comically added: “Meddy has no right being as good as he is with movement so goofy.” @dbiglizard offered similar analysis with: “Meddy has wacky tacky movement I find his playstyle weirdly unique.”

The praise is a welcome change for Medvedev, who responded to being booed by fans in his second round win over Dominic Thiem. Earlier this year he was also prevented from competing at Wimbledon, amid the All England Tennis Clubs banning Russian and Belarusian players.

He’ll begin his Paris Masters campaign on Tuesday, with his opponent yet to be confirmed. Shapovalov plays on the same day, against Argentina’s Francisco Cerundolo.