The back complaint remains, but it was sunny side up for world No.2 Rafael Nadal after his first official match in close to three months evolved into a straight sets progression to the Australian Open second round.

“A good start, happy,” said 20-times major champion Nadal, again not trying to downplay his back niggle that caused him to miss the entirety of Spain’s ATP Cup campaign last week. 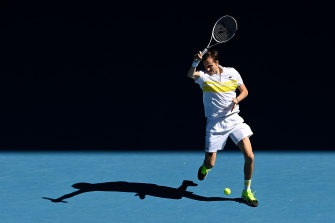 “Yeah, I get asked this question a lot, so if people consider me as a favourite, it’s actually a good job
because I worked all my life to be one of the, let’s say, top players in the world,” Medvedev said.

“I’m happy that I’m part of them right now. But you know, you need to win seven matches. I just won one, so I need to win six more against very strong opponents, all of them, out of five sets.

“That’s 18 sets more you need to win, which is a lot. It’s like nine three-set matches, so I’ll take it step by step.”

Countryman and seventh seed Rublev defeated German world No.102 Yannick Hanfmann, 6-3, 6-3, 6-4, off the court on John Cain Arena in one hour and 42 minutes.