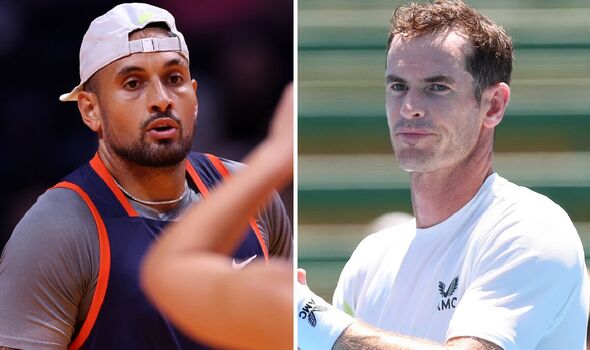 Andy Murray has claimed Nick Kyrgios can win his first Grand Slam singles title at the Australian Open this month as the Scot insisted he has no “timeframe” to retire. Aussie No 1 Kyrgios won the Australian Open doubles last year and reached the Wimbledon final.

Ash Barty ended Australia’s 44-year wait for a home singles champion last year – and then retired. Kyrgios has not played a competitive match since the quarter-finals of the Japan Open last October but is playing Novak Djokovic in an exhibition on Friday.

And Murray said: “Last year he won the doubles here and then had a great run at Wimbledon as well. He was really close and he wasn’t that far away at the US Open either. He’s been knocking on the door the past couple of Slams and hopefully he has a good preparation and everything to give himself the best chance. He can do it but it’s not going to be easy.”

The Scot announced he would be forced to quit tennis before the tournament here four years ago but on Wednesday he beat world No. 97 Zhang Zhizhen 2-6 6-3 10-2 at the Kooyong Classic exhibition event.

The world No 49 said: “I still love hitting tennis balls, I’m fortunate I’m able to do it at a high level, it’s not the level that it was five or six years ago but I love the sport.

“I’ve been healthy the last seven months. I’m not waking up with aches and pains like in the last few years. As long as the body holds up well and I’m training properly and performing to a level I’m enjoying, then I will keep going.

“But I don’t have a timeframe for retirement.” Novak Djokovic has meanwhile admitted he was the “villain of the world” last year. But the nine-time champion has insisted he did nothing wrong when he was deported from Down Under after entering without a Covid vaccination.

Djokovic, 35, will play a charity re-match of the Wimbledon final against Nick Kyrgios in a sold-out Rod Laver Arena back in Melbourne. And before his return to the scene of his greatest successes and biggest humiliation in Victoria, the No 4 seed spoke to local TV station 9News Melbourne to give his version of events.

Djokovic blamed the media for his deportation on “health and good order grounds”. He said: “I was really drawn into a storm in media worldwide that was related to anything to do with Covid and the vaccine.

“All of a sudden I became the villain of the world which is obviously a terrible position to be in as an athlete. “But that is something I guess I had to learn how to handle. The media has picked on me big time for several months and not in a positive note, so that has created a lot of disturbance to my brand and to me personally and people around me.

“I was just following the rules. There were two or three more people that came into Australia 10 days before I did with exactly the same exemption that I had. My exemption was verified by an independent body and panel of doctors.

“So, it was an unknown who was giving the request. I really hope the crowd will be receiving me well. That’s something I cannot predict. I don’t know. It is something that is going to follow me for some time.

“Obviously I wish for a positive reception but it’s in their hands. I don’t hold any grudges. I am definitely not against the people of Australia.”