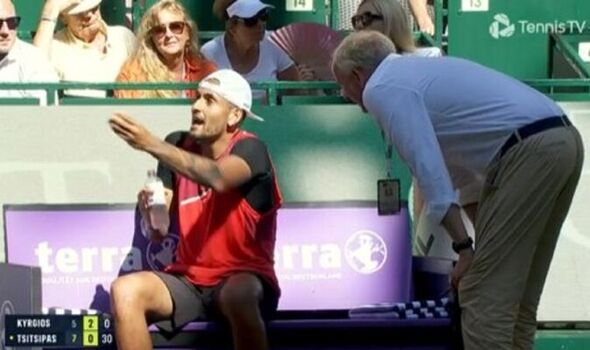 Nick Kyrgios made a dig at Rafael Nadal after receiving a time violation during his Halle match against Stefanos Tsitsipas and refusing to play, calling the supervisor to court. The world No 65 took aim at the Spaniard for taking even longer between serves but failing to receive warnings.

Kyrgios walked to his bench and sat down with Tsitsipas serving at 0-2 30-0 after receiving a time violation for taking too long to be ready to return his opponent’s serve. The Aussie unleashed a tirade at the umpire, ranting about how long players like Nadal took to return while avoiding violations for doing the same, claiming he was simply walking to get his towel.

“This happens every match, I waited so many times for Rafa,” he told Timo Janzen, sitting on his bench in protest and calling the ATP supervisor to the court as he continued to state his case. While waiting to continue the game, the second seed stood at the baseline practicing his serving as the 27-year-old continued to argue with the supervisor.

Kyrgios eventually gave in and retreated to the baseline to continue the game, and Tsitsipas – having gotten some practise in during the delay – served two aces to seal the game, trailing by a break at 1-2.

Kyrgios had already received a warning for smashing his racket at the conclusion of the first set after being broken to lose it 7-5. He had also complained about hawkeye and disturbances from the crowd in the first and second set before receiving the time violation while leading 2-0 with a break in the second.

The chair umpire was forced to ask the crowd not to disturb play after a phone went off, and the former world No 13 said: “When a player can’t react to having a phone go off, bad line calls, someone coughing. Why is everyone here? Bro listen to the things that are going wrong, they’re not normal.”

Despite his outburst in the second set, the Australian Open doubles champion suddenly came from 0-40 down to set up a break point on the Tsitsipas serve with the Greek serving at 1-3 but the 23-year-old managed to fend off his opponent and hold on.

But the second seed couldn’t keep Kyrgios down for long, as the world No 65 broke to lead 5-2 and closed out the second set to love, forcing a decider.