Australian superstar Nick Kyrgios showed his sensitive side when rushing to the aid of an elderly fan after one of his shots struck her in the face at the Citi Open. However, after offering her his towel as a souvenir, the woman was bamboozled as to what to do with the memorabilia.

Kyrgios was taking on Tommy Paul in the round of 32 of the tournament when he saw his return of a serve bounce out of the court and into the front row, hitting a lady in the face. The 27-year-old instantly made his way over to the partition to apologise for his shot and ensure that she was okay.

Kyrgios then handed the lady his towel as a souvenir for the day to show that he truly was sorry. But the woman didn’t quite see the action in the same light – turning to her family and asking: ‘what is this for?’

The incident didn’t distract the unseeded star from the match at hand though, taking the match 6-3 and 6-4. Kyrgios’ victory sets him up for a tie with Reilly Opelka. The fourth-seeded player beat Denis Kudla in his round of 32 tie.

JUST IN: Nick Kyrgios apologises to fan after reviving tradition at Citi Open 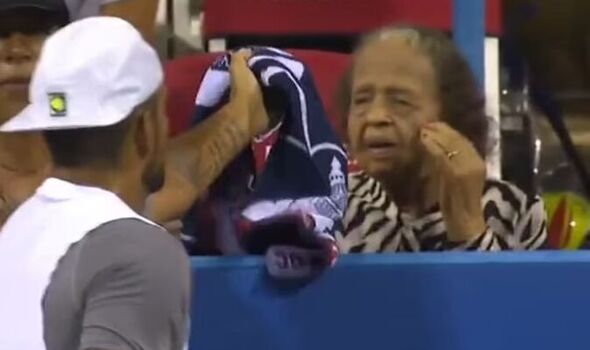 Kyrgios has never beaten Opelka in his career but finds himself in flying form this time around and will be hoping to make amends on Thursday night. Speaking earlier in the ATP 500 event, he said: “I won the tournament in 2019. Seeing my name up on the stadium and then knowing I didn’t play well here at all last year.

“I lost in the first round, and I was just going through such a dark time in my life. I’m just so happy to be here with my team, the love and support from the crowd. I’m just really happy to be out here playing some good tennis again.” 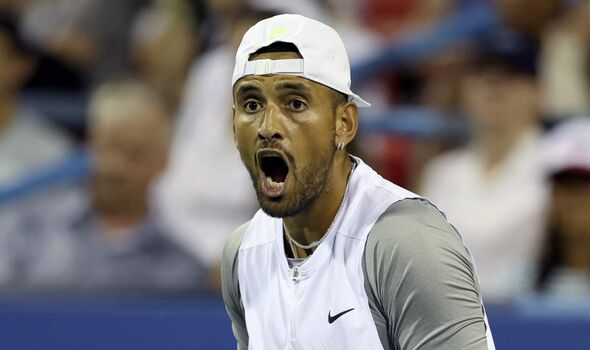 Kyrgios has also united with Jack Sock in Washington. The pair are set to take on Edouard Roger-Vasselin and Nicolas Mahut in the quarter-finals of the men’s doubles on Friday.

Speaking about linking up with Sock, who he has played with since 2015, he said: “I love playing with Jack because he is hands down the best player in the world, but at the same time I hate playing with him because there is so much pressure on me because he wins with absolutely anyone he plays with.

“But I got that monkey off my back in Lyon [in 2018], we got a title under the belt in Metz. I can tell my grandkids I got a title with the best doubles player in the world.”