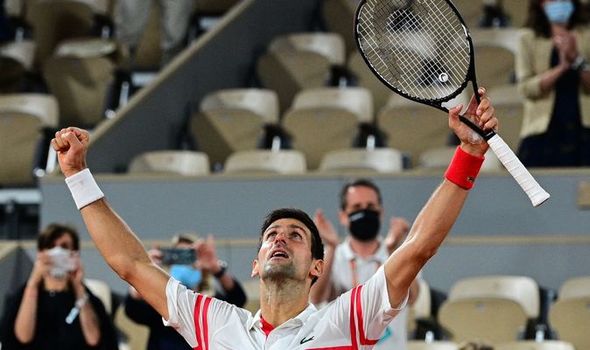 Novak Djokovic sensationally ended Rafael Nadal’s dominance of the French Open by beating the Spaniard in a stunning semi-final at Roland Garros. It ended 3-6 6-3 7-6 6-2.

The Serb rose from a set down to book a final place against Stefanos Tsitsipas, who defeated Alexander Zverev in a similarly excellent match of tennis earlier in Friday.

The 35-year-old has won each of his previous finals at Roland Garros, but this will not be the year in which he manages a 14th title because he was defeated by an incredible Djokovic comeback.

World No. 1 Djokovic had fought back but lost the first set 6-3, though nobody was going to predict just how emphatically he would turn the match around.

He took an early lead in the second set and eventually won it 6-3.

A stunning third set took several twists and turns, – and everyone watching inside Philippe-Chatrier feared the announcement that would tell them to depart. Some had even decided to leave ahead of the 11pm curfew.

Both players broke each other and struggled to take a grip. Djokovic eventually won on a tiebreaker.

An announcement asking fans to depart was then made, but shortly after the French authorities allowed them to remain and see out the match – and they saw a wonderful ending from Djokovic.

He stormed through the final set, winning 6-2 to book a place in just his fourth French Open final. He has only won once but will be the favourite in his clash against first-time finalist Tsitsipas.

Tsitsipas became the first Greek player to reach the French Open final when he defeated Zverev.

He said: “It means a lot. It was a difficult match. It was a match full of emotions, full of so many different phases that I went through.

“So, in the end, it was just such a big relief I was able to close it in such a good way. It was just exhausting.

“It was difficult to handle all of these things and put them together, kind of compromise on some others. I was able to deliver and close the match when I had to. I’m proud of myself.

I was trying to be in a good relationship with myself and get encouraged and push forward for something good to happen.

“I knew I was not done at that point (after losing the fourth set), I had more to give. I was playing much better. All I had to do was put in the concentration.

“I’m someone who fights. I was not willing to give up yet. I think I did few things right that worked in my favour. I was still alive. I was still able to come back to the match.

“It was a breath of fresh air, that first game. I felt revitalised.”