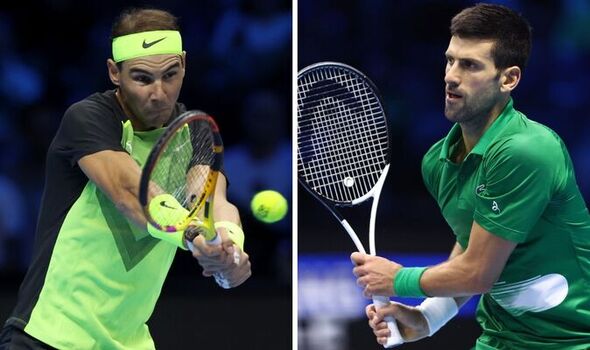 Novak Djokovic can protect his long-time rival Rafael Nadal’s place in the rankings by defeating Casper Ruud. If he wins the ATP Finals title on Sunday, the Norwegian will overtake the 36-year-old to end the season as No 2 in the world but Djokovic can prevent a last-minute drop in the rankings for Nadal if he defeats Ruud in the final.

Djokovic and Ruud will face off in the last match of the 2022 season as they do battle for the ATP Finals title on Sunday. History is on the line for the Serb, who is hoping to tie Roger Federer on a record six titles at the year-end championships, while the 23-year-old is seeking the biggest title of his career.

The third seed in Turin also has an extra incentive to get his first win over Djokovic and win the title, as he will leapfrog Nadal in the rankings to return to his career-high of world No 2 to end the season, ensuring he starts the 2023 season just 500 ranking points behind current world No 1 Carlos Alcaraz.

It means that the Spaniard will be relying on his long-time rival to defeat Ruud and protect his spot in the rankings, which would see the 23-year-old end the year at No 3 in the world instead – one place above his current spot. And Djokovic has a good chance of beating the third seed in Turin as he holds a 3-0 record against him, having never dropped a set in their previous meetings.

JUST IN: Federer plea made by ATP boss after Swiss was ‘begged’ in private chat

The Norwegian is the higher-ranked player this time around but confessed that he still felt like the underdog ahead of tomorrow’s final.  “He’s a player that doesn’t have many weaknesses at all,” Ruud said after his 6-2 6-4 semi-final win over Andrey Rublev.

But the two-time Grand Slam finalist was taking some hope from Djokovic’s recent Paris Masters defeat, where he lost to 19-year-old Holger Rune in the final from a set up. He added: “But you know, he’s human. He’s had a great year, even though he’s been unfortunate with everything that has been going on for him but he is human –  he lost two weeks ago to Rune in the finals, so it’s not like he plays these finals every day of his career and in his life.

“I’m sure he will also feel a little bit of pressure. There’s a lot on the line. And let’s see, ranking-wise I’m maybe ahead of him, but I feel like the underdog.” With Ruud sounding quietly confident despite branding himself the underdog, Nadal will be hoping that Djokovic does what he does best and fails to fold under pressure.

The Spaniard had been in with a shot at the year-end No 1 ranking this week but needed to either reach the final with a 3-0 group stage record or win the title, but he was eliminated after losing his first two matches of the week, allowing Alcaraz to become the youngest man ever to finish the season at the top of the rankings.

I’ve got my little brother back. Now the world will get Nick Kyrgios the Wimbledon champion