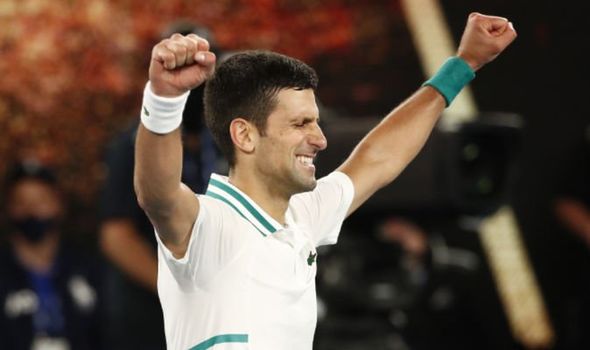 Novak Djokovic won his 18th Grand Slam title at the Australian Open today to close the gap on Roger Federer and Rafa Nadal.

The world No.1 fought off the challenge of the next generation to the dominance of the Big Three by thrashing Daniil Medvedev 7-5 6-2 6-2.

The Serbian superstar has now won nine Australian Open title – and never lost in the final. And he was simply too good against the new world No.3 playing in his second Grand Slam final.

Medvedev had been on a 20-match winning streak which had seen him win his last three tournaments and beat Djokovic at the Nitto ATP Finals.

But beating the world No.1 at Melbourne Park is a different matter as he completed his second hat-trick of consecutive wins in the first Grand Slam of the year – and his 12th consecutive win there against a top-10 player. He broke the Medvedev serve eight times.

Djokovic is guaranteed to set a new record as world No. 1 when he spends his 311th week at the top of the rankings on Monday 8 March – surpassing Federer’s record of 310 weeks. 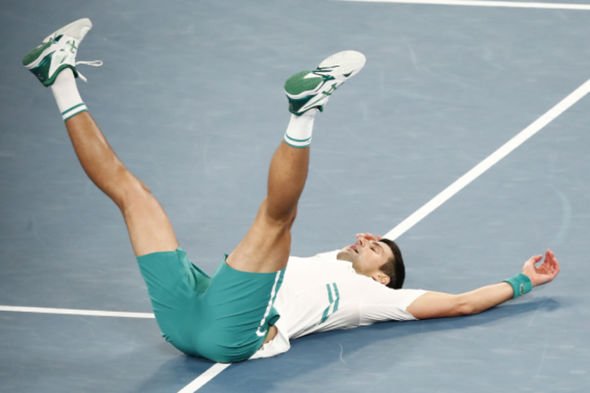 Now his focus will be to catch the Swiss superstar and Nadal who have both won 20 Grand Slam titles.

The Spanish superstar will bid to win his 14th French Open title in June while Federer, 39, has his best chance at Wimbledon.

Djokovic suffered an abdominal injury in the third round but reported he was back to full fitness after his semi-final victory over qualifier Aslan Karatsev.

And the No.1 seed started strongly back in his favourite Rod Laver Arena by breaking Medvedev’s first service game to lead 3-0.

The Russian broke back to level the set at 3-3 but Djokovic made his move at 5-5 to break again and took his first set point after 42 minutes when Medvedev hit a weak forehand into the net.

Medvedev threatened to fight back when he broke in the first game of the second set before Djokovic won the next four games.

His procession was only interrupted in the fourth game when a let was called during a point due to a crowd protest against the treatment of refugees in Australia.

During the commotion, Djokovic put his finger to his lips and asked German umpire Nico Helwerth to ask for quiet. The Serb broke the Russian for a third time in the set to go two sets up. 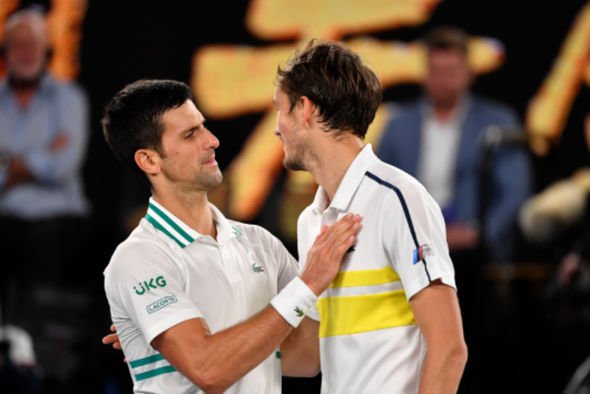 Medvedev came back from a similar position in his first Grand Slam final at the 2019 US Open against Rafa Nadal before losing a thriller in five.

Ruthless Djokovic did not allow such drama and took his first Championship point with a superb overhead volley winner.