It was the game that stunned the tennis world. Aged just 19 and ranked 144th, Nick Kyrgios reached the Wimbledon quarter-finals in 2014 by defeating the then world No.1, Rafael Nadal, in four sets on centre court. He was the first player ranked outside the top 100 to beat a world No.1 since 1992 and the first in a decade to reach the final eight at Wimbledon on debut.

While Kyrgios was defeated in his next match, his extraordinary talents on the court were there for all to see. At the time, much was made of his potential to join the elite ranks of tennis. Eight years later and, at best, a record of mixed success, Kyrgios once again faces Nadal at Wimbledon – if the champion is well enough to play – this time for a chance to reach his first grand slam final. 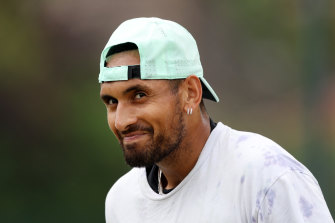 Not all the criticism Nick Kyrgios attracts is valid.Credit:Getty Images

If, and it’s a huge if, Kyrgios were to make the final, and especially if he were to win it, it would finally validate his unquestionable raw talent. But it would also be a reminder of the many years in which most of the discussion about Kyrgios has focused on his on and off-court theatrics and his inability to live up to his potential.

With his brash manner and flamboyant personal style, Kyrgios has become a lightning rod for controversy. At times, for good reason. When he made derogatory comments during a match in 2015 about his opponent Stan Wawrinka’s girlfriend, it displayed an immaturity that even he later apologised for.

His almost constant abuse of umpires and officials is hardly worthy of an elite sportsman. And it was revealed this week that he will face court in Australia accused of assaulting his former girlfriend. He is entitled to the presumption of innocence as that case proceeds.

Not all the criticism he attracts is valid. His willingness to wear his heart on his sleeve, his ability to attract and feed off the energy of a crowd, his readiness to play a style of tennis that puts entertainment before grunt-inducing power, and his pledge during the summer bushfires of 2019-20 to donate $200 to fire relief for every ace he hit are all to be admired.

The common refrain is that if only he could put the “bad boy” antics behind him and focus on the tennis, Kyrgios would surely live up to expectations. While that may fit an ideal story of sporting redemption, it fails to take into account Kyrgios the person.

From his early teens, he was known for his prodigious talent, but also a propensity for rebellion on and off the court. Tennis great Pat Cash looked after a 16-year-old Kyrgios when the teenager was chosen to play with the Australian squad at a junior Davis Cup tournament in Mexico. Cash was convinced of his gifts as a player, but he recounted how Kyrgios was prone to inexplicable meltdowns while playing and he was horrified to discover that, despite nursing a strained muscle, the teen had organised a football-throwing competition with teammates. Kyrgios’ inclination not to be that interested in training was also evident from a young age.

So while his misbehaviour and occasional lack of effort may infuriate many, his past makes clear he will not be tied down by the binary view that he could somehow discard the bad for the good. What seems inevitable is that he will continue to thrill and torment tennis fans in roughly equal measure.

It has been 20 years since an Australian, Lleyton Hewitt, won the men’s final at Wimbledon. In his younger days, Hewitt also courted controversy, once being accused during a match at the US Open in 2001 of making a racist comment to an African-American linesman. Despite the US crowds then booing him at every opportunity, he went on to win the tournament, defeating Pete Sampras.

After Hewitt secured his first major title, Age corespondent Mark Riley wrote his “win would finally endear him to those in Australia who have found him difficult to like because of his on-court histrionics and some ill-considered comments in the past”. One suspects Kyrgios would be open to history repeating itself.

Gay Alcorn sends a newsletter to subscribers each week. Sign up to receive her Note from the Editor.

Inside the National Tennis Centre: How diligence and agility has driven elite tennis’ return