Exactly 20 years ago, American legend Pete Sampras won the last of his seven All England Club titles. His name was written in Wimbledon folklore.

In 2001, 19-year-old Roger Federer pulled off an era-defining win in the fourth round of Wimbledon against Sampras. The moment in tennis history signalled a changing of the guard.

But before the Swiss began his Grand Slam streak, sharpshooter ‘Pistol Pete’ had been the king of Wimbledon with his unbreakable serve commanding the hallowed turf of the All England Club since 1993.

Pete was born to a Greek father, Costas Sampras, and a Jewish mother, Sarah Steinber, in Washington DC. He took to playing tennis at the age of three.

Dr Peter Fischer was the man who is credited for drawing up the blueprint for Sampras’ career, helping him develop his winning mentality. Having already become the US Open’s youngest-ever male singles champion at the age of 19 years and 28 days by defeating Andre Agassi in 1990, Sampras eyed Wimbledon as his next big major, but he was made to wait three years before the title came. When it did, he defeated Jim Courier in an Independence Day showdown between the top two American men in the world.

“My win at Wimbledon in 1993 was really the beginning of my career as a dominant champion,” Sampras is quoted as saying in his autobiography A Champion’s Mind.

“I finally understood what it meant to be a worthy Grand Slam champion.”

Thus followed an eight-year spell of dominance that not even Federer was able to replicate in his prime. From victory in the first round in 1993 to his last title win in 2000, he lost only one match. It was a quarter-final defeat in 1996 to eventual winner Richard Krajicek.

Sampras defended his title in 1994 when he completed a straight-sets victory against the big-serving Goran Ivanisevic and a year later, he became the first man since Bjorn Borg to complete a hat-trick of Wimbledon titles when he came from a set down to beat Boris Becker. 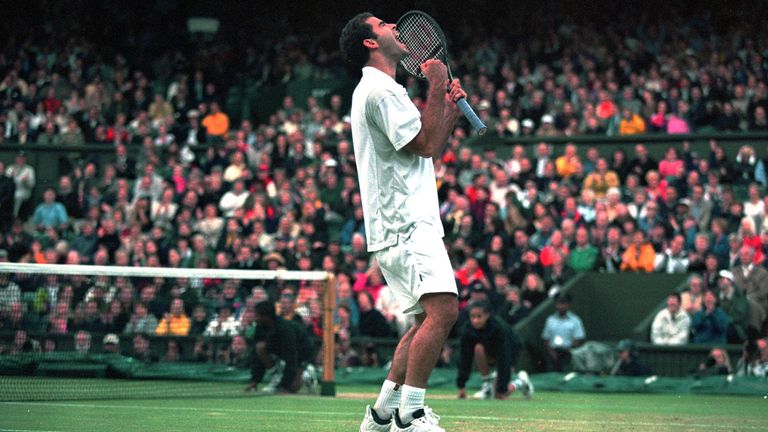 Sampras’ longtime coach and close friend Tim Gullikson was diagnosed with brain cancer earlier in 1995 and the American dedicated the victory to him after the match.

“He’s a true champion,” Sampras said. “The way he’s handled his treatment has been a real inspiration.”

Becker, the crowd’s sentimental favourite, was full of praise for Sampras when he said: “If there is a role model in tennis, it’s Pete Sampras. He’s behaving perfectly on court. He’s a real nice fellow off the court and he’s playing great tennis altogether. He doesn’t really have a bad shot in his game. I think he’s extremely good for the game of tennis.”

Sampras had everything a tennis player could wish for. He was the complete all-rounder who showed little emotion and had a game made for grass.

Head down, he would bounce the ball between two and four times with a continental grip, which is used to serve, volley and slice. Sampras would then toss the ball up high, arch his back, and unleash untold pain upon his opponents. His serve was flat, hard and at times, returnable, while his phenomenal ‘slam-dunk’ smash was a thing of beauty. 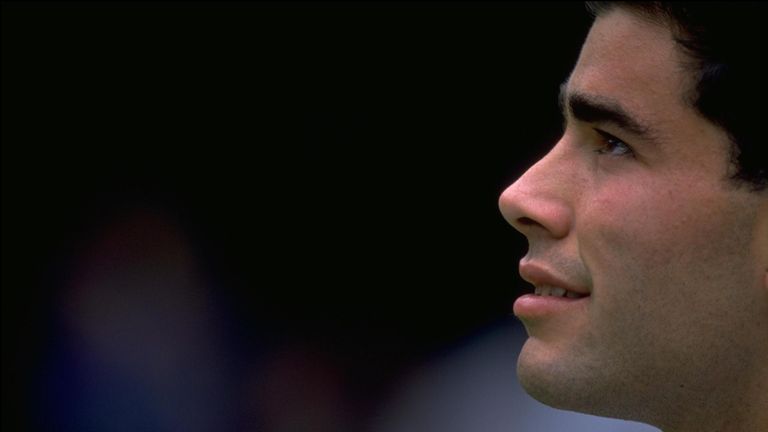 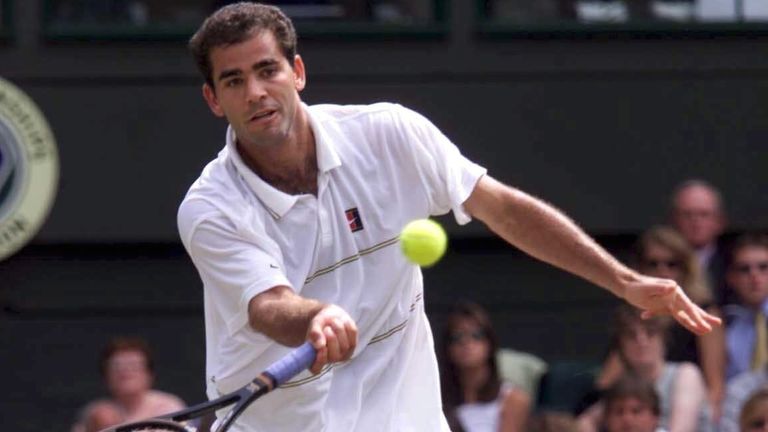 There is always pressure at Wimbledon, I felt like it was the Super Bowl of our sport.

Pete Sampras after victory at Wimbledon in 1999

In 1997, Sampras returned to the final where he crushed Frenchman Cedric Pioline for the loss of 10 games. He only faced one break point in a one-sided affair on Centre Court.

In his autobiography A Champion’s Mind, he wrote: “My performance at Wimbledon in 1997 may have been my best, in terms of having full control of my game and using it to maximum advantage for the longest sustained period. One stat said it all: I served 118 games, and held 116 times.”

The following year was his toughest Wimbledon final after he was taken to a deciding set by the man he beat four years earlier, Ivanisevic.

With his coach, Paul Annacone, watching his player face his most difficult challenge, Sampras rose to the occasion to win 6-2 in the fifth.

“Compared to all the Wimbledons I’ve played, this is by far the toughest,” said Sampras. “I’m sure this one is going to sit with both of us, you know, this match, and I’m sure he’s frustrated. I would be frustrated if I was in his shoes.” 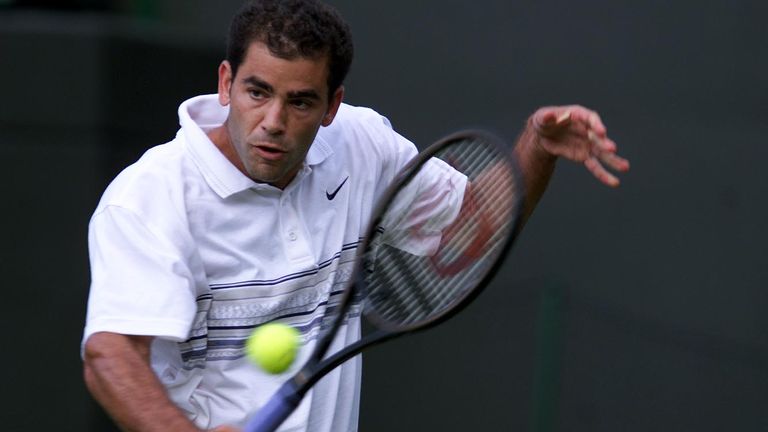 Tim Henman was a familiar semi-final foe for Sampras. The Briton saw his hopes of reaching his maiden Grand Slam final extinguished in 1998 and it was a familiar tale the following year as well. Sampras won in four sets before defeating long-time rival Andre Agassi in straight sets to seal his sixth title.

He required one hour and 55 minutes, hitting 17 aces and losing just seven of his first-service points (49/56). “He walked on water,” said Agassi in the aftermath.

Sampras’ final Wimbledon title was his fourth in succession. This time, it was a new opponent in the form of Australian Pat Rafter, but it was the same old story as the American ran out the winner in four sets, despite battling tendonitis in his right knee all the way to the final.