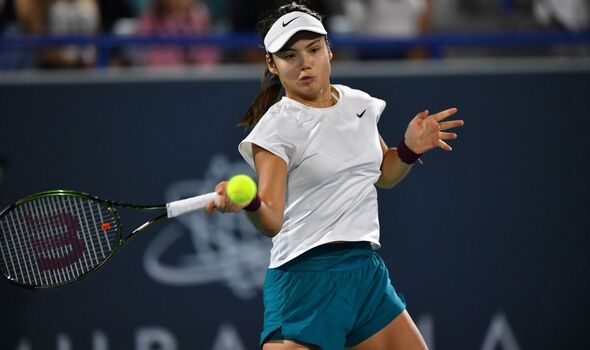 Emma Raducanu was defeated by Ons Jabeur in her first match back from a wrist injury that ended her season early. But the Brit still made a statement as she managed to come from behind to take the opening set before narrowly losing in a match tiebreak 5-7 6-3 10-8.

Raducanu stepped out onto the court in Abu Dhabi for her first match in more than two months, as she faced the defending women’s champion at the Mubadala exhibition tournament in Jabeur. The world No 76 had been forced to cut her season short with a whist injury and started strong in her comeback match, creating four break point chances in the very first game as the world No 2 was forced to fend her off and eventually held after nine minutes.

The 20-year-old continued her quick start, racing to a love-hold, but suddenly found herself down a break in what became a rollercoaster first set. Jabeur pounced to take a 3-1 lead following her difficult start to the match, but the British No 1 earned herself two more break points while trailing 2-4, converting her second to get back on serve and stay hot on the heels of the two-time Grand Slam champion.

The break points kept coming as Raducanu was broken straight back to love, allowing the 28-year-old to serve for the set before the 2021 US Open champion broke again and held to level at 5-5. Last year’s champion at the Mubadala World Tennis Championship suddenly found herself in trouble as she hit a double-fault to gift Raducanu yet another break, with the world No 76 this time being the one with the chance to serve for the set, and she held to love to lead 7-5 after 50 minutes.

JUST IN: Carlos Alcaraz has Djokovic request for 2023 in bid to prove himself

The second set was a different story as both women continued to hold, failing to get a look-in on one another’s serves. Once again it was Raducanu who got broken first, as Jabeur needed just one break point chance to take a 4-2 lead and backed it up with a love-hold.

Last year’s winner took the second set 6-3 after 36 minutes to force a final set match tiebreak, with the first to 10 points winning the match. Both women traded mini-breaks before Jabeur took a 3-1 lead after one of Raducanu’s strikes just caught the tape on the net and was sent out. Raducanu managed to get back level and then went a mini-break up herself at 6-5, but lost her advantage as the pair continued to trade mini-breaks.

After leading 8-6, Raducanu suddenly found herself match point down at 9-8 as Jabeur managed to defend her title with a 5-7 6-3 10-8 comeback win over the debutant in Abu Dhabi, while the world No 76 still put on an impressive display by staying with the world’s second-best player until the very end, making her work hard to take the title.

Raducanu’s impressive performance in her comeback match came after she appointed a new coach for a trial period following her split with Dmitry Tursunov two months ago. The 20-year-old is now working with Sebastian Sachs, who previously coached former world No 1 Victoria Azarenka, former top 10 player Julia Goerges, and guided Belinda Bencic to her Olympic gold medal last year.

The British No 1 will next be in action at the ASB Classic in Auckland, starting on January 2. The WTA 250 event has a strong field with the likes of Coco Gauff and 2017 US Open champion Sloane Stephens in the field, as well as Raducanu’s 2021 US Open final opponent Leylah Fernandez.

Tennis stars in feisty altercation after match as umpire steps in